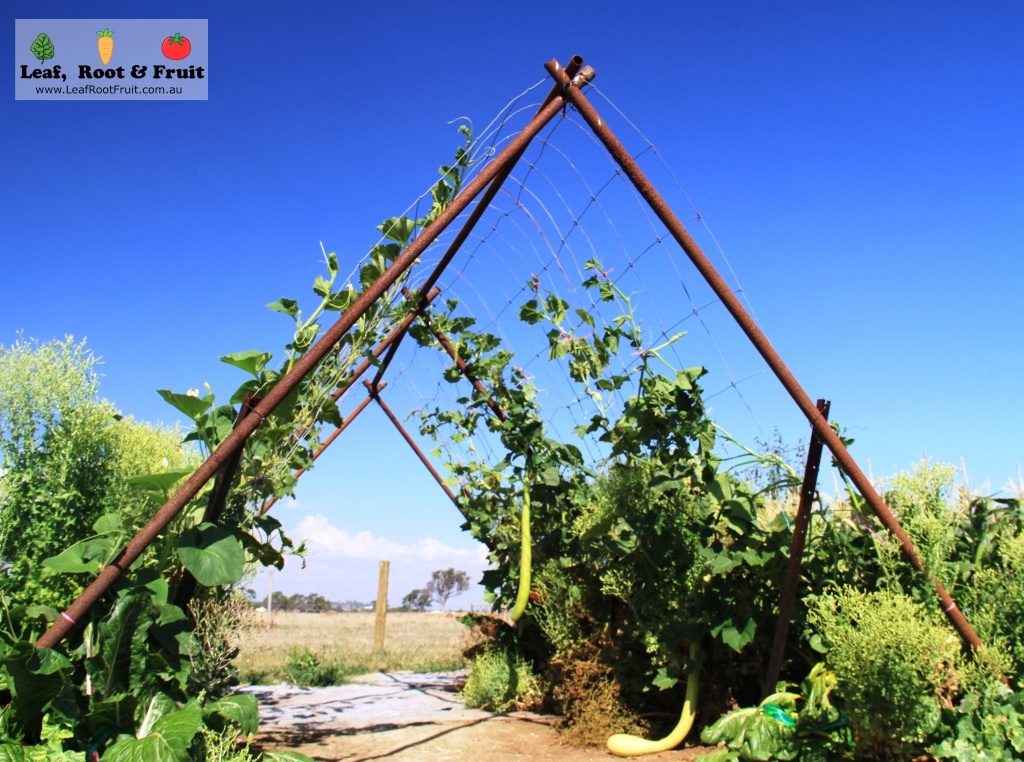 The winner of the race to the top of the trellis was the new guinea bean. I’ve never grown them before, and I’m quickly finding out how rampant they are. Not only is the main vine growing quicker than any of the other crops, but the lateral (side) shoots are quickly filling out the trellis too. Their soft and feathery vines are somewhat sticky. The vines have been covered in female flowers, but only two fruit have set so far. At 88 cm long, the biggest fruit is rivaling the tromboncino for size. We’ll let the biggest fruit grow to see how big it will get. There is a smaller fruit that we will harvest this week and taste before it gets too big.

The tromboncino plants have slowed in their growth and don’t have many fruit set at the moment. It’s probably a good thing as we were experiencing quite a glut of produce. The biggest fruit is slowly turning brown, indicating that it is reaching the end of its growing phase. Fruit like this can be stored for use over winter, just like pumpkins.

The potimarron pumpkins are slowly ripening up. It looks as though the plants aren’t going to grow much bigger than they are.

The giant tree tomatoes are struggling to compete with all the vine crops. They have two tomatoes set on them though.

The watermelon doesn’t seem to want to grow up the trellis, no matter how much we try and train it. So now we are just letting it sprawl across the ground. It hasn’t any fruit set on it yet.

The lettuces and coriander are all putting out masses of seed. We’ll be collecting plenty of the seed for re-sowing. The coriander seed will also be kept for cooking with.

It can be quite a treasure hunt, but there are still plenty of purple beans being picked.

The tromboncino is getting very large and is turning brown

The giant tree tomato has fruit set on it

We grew this New Guinea Bean last summer. It is 88cm long

Coriander seed is ready for collecting to be used in cooking