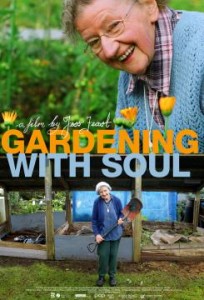 Gardening With Soul is a documentary split into four parts, Winter, Spring, Summer and Autumn. It follows the daily life of Sister Loyola Galvin as she oversees the gardens and grounds of the Home of Compassion in Wellington, New Zealand. It’s as far removed from a Hollywood blockbuster as you can get. But, there’s a lot more to this movie than simply following a little old nun around a garden.

Sister Loyola is a warm and optimistic lady who reflects her philosophy on life through her passion for gardening. At the age of 90, her “common-sense” views on aging, religion and the garden are related back to the changing of the seasons. This robust and quirky nun has got such a positive outlook on life and all living things that she’s sure to inspire you to don a fluffy beanie and get out there digging. Whether it’s children, a plant, or patch of dirt, Sister Loyola firmly believes in giving it a “good start.” She shares with the viewer her fresh views on love, the Catholic Church, raising children, and families.

Often resorting to the improvisation of a garden hoe as a walking stick, watching Sister Loyola march around and the garden beds is both humbling and inspiring. Gardening With Soul avoids focusing on the specifics of the veggie patch or the “rules” of successful planting and instead focuses on Sister Loyola’s philosophy. Sister Loyola teaches us to focus on enjoying what is around you by observing and respecting nature. She tells us that gardeners are always planning and plant with a sense of purpose. Sister Loyola and her team put a lot of effort into creating the perfect compost, including an obligatory drive to the coast to collect seaweed. In creating the compost, they identify and work with the seasonal changes in the garden. 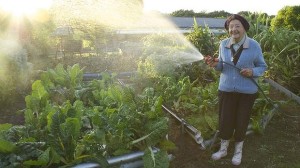 Sister Loyola Galvin’s frank and open reminisces of her past are quite moving and emotional, but at other times, you won’t be able to stop yourself from laughing at her cheekiness.

“The Garden is saying to me all the time; ‘life is evolving’, and if you are going to spend the last few years of your life worrying about how it’s evolving, then you’re wasting your time. Just enjoy it. Make sense?”

Appealing to a wide audience, Gardening With Soul is a well-deserved winner of the Best Documentary at the 2013 NZ film awards. We recommend that next time it’s too wet to get stuck into the garden, you take the chance to watch it. It’s screening at selected cinemas in Melbourne right now.