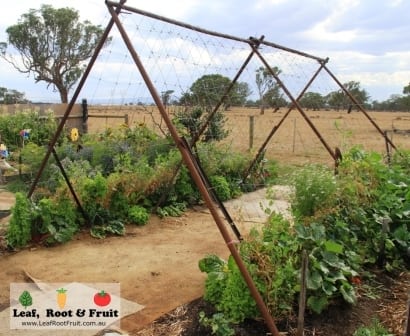 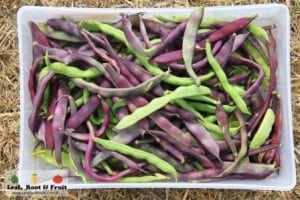 We’re blanching and freezing the excess as well as giving some away. One lesson already learned from this experiment is that purple beans are a lot easier to locate than green ones in the tangled mess of vines!

The leafy green crops at the base of the trellis are very advanced. Many of the lettuces and spinach are going to seed. The coriander has grown right through the trellis and is covered in a mass of flowers. We’ve been harvesting as much as we can, but there’s far more greens there than we could use and give away. Next time we might focus on sowing more basil so that we can turn the excess into pesto.

Many of the cucurbits are vining. Some of the pumpkins have overtaken everything else and are racing toward the top of the trellis. One pumpkin is up to shoulder height and has a few female flowers on it already. The tromboncino plants are also growing vigorously. One of them has a small female flower developing.

The watermelons and the two remaining cucumber plants are growing more slowly than the pumpkins, there’s a good chance that they will become choked out shortly.

The New Guinea Beans have very soft leaves. They are starting to vine up the trellis and are showing signs of putting out female flowers.

The companion flower bed is looking stunning. The sunflowers are all blooming, some of the earlier ones have lost their outer yellow petals but still have massive dinner-plate sized heads full of seeds. There are bees buzzing all over them. The borage seems the most popular flower of them all.

The pumpkins are starting to growing up the giant edible trellis. This one is at shoulder height already.

The giant sunflowers are attracting plenty of bees