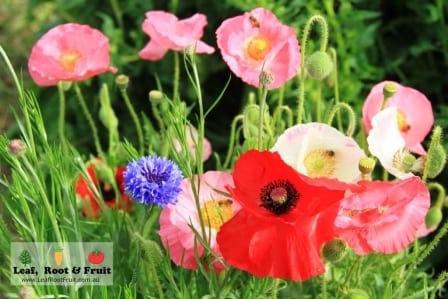 A cluster of poppies and cornflower growing in my mother’s veggie patch. These sorts of flowers make great companion flowering plants.

My mother still lives on the family farm at Mickleham. She’s has  an extensive and productive veggie patch in the backyard. It’s also the location of our giant edible trellis project.

Back in autumn, mum came across some “out of date” packets of flower seeds she had stashed away. The seeds included poppies, corn flowers, alyssum, and also a cottage mix. Rather than just throwing them away, mum scattered the seeds in a few spots throughout the veggie patch. The poppies germinated especially well and have really taken off, with the recent spring weather, we are now enjoying.

When I visited mum on the weekend, I was stunned at the gorgeous display the poppies made, as now they are flowering. What was equally incredible was the number of bees that they attracted. At any given moment, each poppy flower had three to four bees buzzing around it and clambering  to get in. They were after the nectar in the middle of the bloom. In the process they were getting covered in pollen and moving it on to the next flower that they visited. Here are some photos that I took on the day.

Two bees on a pink poppy

Pink poppies with leaves and bees

Three bees at a red poppy

Poppies are great fro attracting pollinators such as this bee 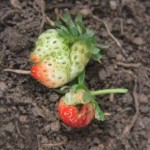 Deformed strawberries are often a result of poor pollination

When planting out your veggie garden, it’s always a good idea to include some companion flowering plants such as:

Not only do these companion flowering plants look great, but they’ll help ensure all your veggies are well pollinated. Increased pollination means better crop yields and better quality produce. For example, deformed strawberries are usually a result of poor pollination.

What sorts of companion flowering plants do you use around the veggie garden to attract pollinators?

Marigolds are fantastic companion plants and encourage pollinators too

Borage is great for encouraging pollinators like bees into the garden

Calendula is great for attracting pollinators