Recently, I posted some observations and theories that I have been developing on citrus gall wasps. To test out the theories, we’re setting up a trial to see which treatment regime might produce the healthiest and most productive trees.

Setting up the Gall Wasp experiment 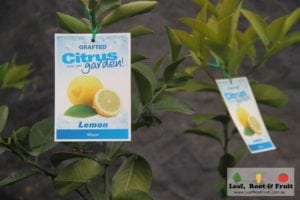 In August 2017 we purchased 10 Meyer lemon trees. At the time of purchase, they were relatively identical in size, shape and stage of growth. The trees were randomly paired up and allocated to five different treatments:

We potted up 10 lemon trees. Two trees are each going to be subjected to different treatments.

The plants were placed together to ensure that all experienced similar growing conditions, sunlight, microclimate and irrigation.

There are several large citrus trees growing less than 50 metres from where the experiment is set up. There are other citrus trees visible in nearby neighboring yards. They are all likely to have some Citrus Gall Wasp in them.

Treatments subjected to the “Prune in June” regime (four trees in total) are to have all visible galls pruned from the tree in June. The galls are to be soaked in a bucket of water. None of the purchased trees had any galls present when purchased. We decided to mimic trees that have been infected to speed up the accumulation of results. So approximately one third of the foliage was removed from the trees subjected to the June pruning regimes (despite there being no galls present in the first year). The other six trees will not be pruned at all in June, in any year.

Our citrus trees following our simulated “prune in June” regime in the first year.

All ten trees will be tip pruned as required in/or around November and again in/or around February (if required). Whilst the trees are small, this will be done with secateurs or finger tips. As the trees grow, we may resort to using hedge trimmers. Pruning will aim to retain as much fruit and blossom on the tree as possible. This pruning is a typical regime that I use on most citrus trees (see our guide on citrus tree maintenance for further details)

Trees are fertilized with Richgro Organic Fruit and Citrus Fertilizer, which was the best performing organically certified fertilizer in our recent experiment.

It will be applied at the rate of one handful per pot, per month. The fertilizer will be scattered around the surface and then watered in well.

The NSW DPI has been trialling some different treatments in commercial citrus orchards. One organic treatment method is showing promise. It involves spraying calcined kaolin clay (Surround®) twice during the citrus gall wasp emergence period. This disrupts the laying of  eggs  and has shown to reduce gall occurrence significantly. We’ve decided to include this treatment as it’s relatively inexpensive, easy to apply and it’s organic.

It is to be applied at the “sunburn rate”. To do this we mixed 8 spoonfuls of power in a small jar of water. This was then tipped into a sprayer and made up to a final volume of 2 litres by adding more water. The trees are to be moved away from the other trees for treatment. The clay is applied using the sprayer and allowed to dry before being returned to their usual position.

Our surround Kaolin. Unfortunately we had to buy this huge bag when we only needed a few spoonfuls!

Measuring out the Kaolin Clay, which is a bit like fine talcum powder.

A close up of the leaves after the tree was sprayed with Kaolin Clay. No wonder the Gall wasp doesn’t want to go near it!

Want to try Kaolin Clay (Surround) for Yourself?

We purchased our Kaolin clay from Muirs in Monbulk. Unfortunately it is only supplied in large bags, enough to last a backyard orchard for hundreds of years.

If you would like to purchase only a small amount, we have it for sale at our Community Night and Food Swaps. See the events page of our website for more information on these.

The peak emergence for Citrus Gall Wasp in Melbourne looked to occur on (or around) the 28nd November 2017. We filmed the above video of wasps emerging from galls on our tree and mating. I monitored the developing galls and when emergence was imminent we moved all ten trees around the perimeter of our infested grapefruit tree. 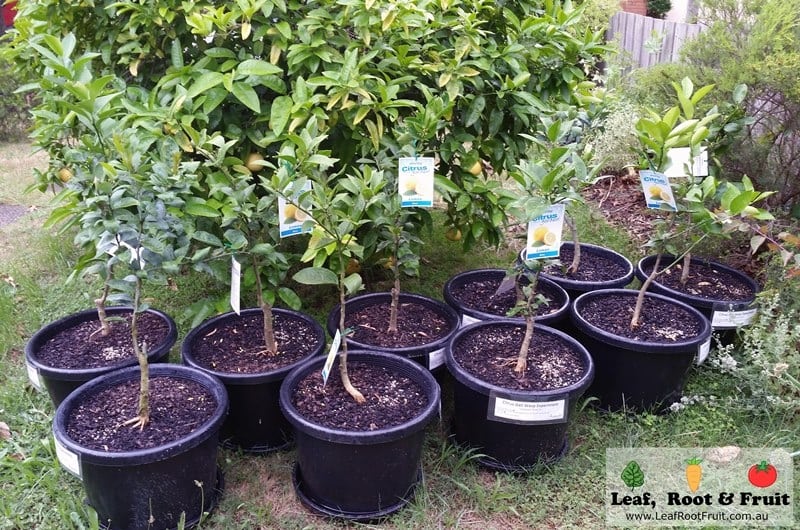 Our citrus gall wasp experimental trees were temporarily placed around the perimeter of our infested grapefruit tree.

The emergence date was about a fortnight later than we had expected. We had based our expected emergence date on NSW data. Future years’ emergence dates for Melbourne are also likely to be around the same time (late October-early December)  Going forward we will adjust the application of spraying the kaolin clay treatment so that we spray fortnightly applications four times, with the first application in the third week of October. 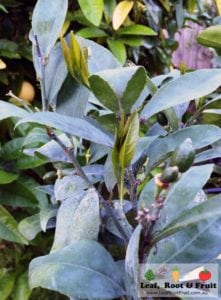 Flushes of new growth evident on Koalin Treated Tree 5A. This tree is likely to show evidence of gall was infestation next autumn. We will adjust our application of the Kaolin treatment for future yers to better coincide with the gall wasp peak emergence.

The kaolin treatment from this year is likely to be ineffective against the gall wasp. Particularly with tree 5A, as it had a flush of new growth since the final Kaolin application. That new growth had no kaolin on it, leaving it susceptible to infection. I expect this tree to have at least a few galls evident next year.

The following trees had lots of new growth at the time of peak emergence. I expect that they will have a large amount of infestation next year:

The following trees were absent of much new growth at the time of peak emergence. I expect that they will have very little infestation next year.

At this stage there is no correlation between the amount of new growth and either fertilizing or pruning regimes. I expect this is because the experiment has only been set up in the last three months. Next spring, once the trees have settled into their growing cycles, a correlation will hopefully be more evident.

All trees have some small fruit set. Tree 2A has the biggest and strongest crop. 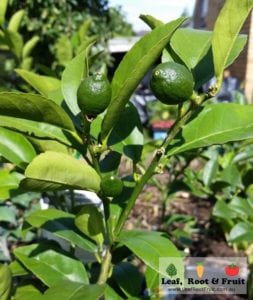 All ten Meyer Lemon trees have some fruit set. The fruit on Tree 2A has the largest fruit.

June is the traditional time to prune out gall wasp. So trees being subjected to Treatment One and Two had their galls pruned out in the last week of June.

At the same time as undertaking pruning we noted lots of observations for each tree. These have been tabulated below.

The following points from this round of observations are most interesting: 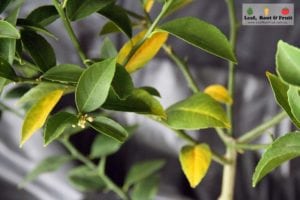 Some of the lemon trees had yellowing leaves 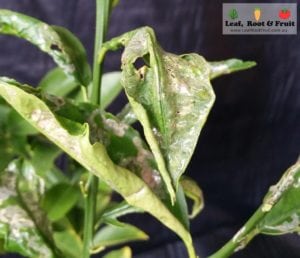 Feeding regimes did not seem to have an impact on susceptibility to Citrus Leaf Miner. However, the trees treated with Kaolin clay had no citrus leaf miner whatsoever. 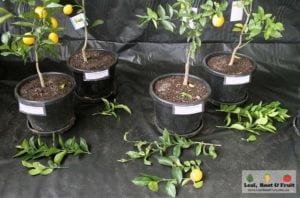 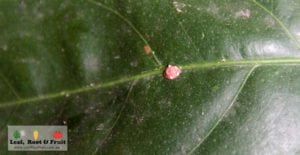 This type of Pink Scale was present on many of the trees. Severity of infestation didn’t appear to be linked to any of the fertilizing regimes.

It is going to be interesting to continue observing the results of the trial. So far, the most promising results have been with the Kaolin treatment. However, we are only a year into the trial, so who knows what the coming years will bring?

The gall wasps in our grapefruit, lemon and orange trees began to emerge in large numbers on 2nd December. This particular day was hot and windy. The high winds will help to disperse the wasps to infest other trees in the area. I suspect they may travel hundreds of metres, if not kilometres in the wind. 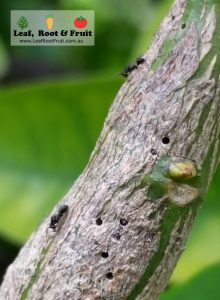 The 2018 peak emergence is three days later than 2017. Which shows just how much these wasps behave like clockwork. It also shows why “Prune in June” is such terrible timing for controlling the problem.

We noticed that wasps continued to emerge from local trees for most of December. Many galls stayed dormant and haven’t had any wasps emerge. We haven’t noticed this in previous years, but will look out for it more in the future. I suspect that this may be due to sterile eggs being laid under the bark. Perhaps this is enough to stimulate the tree to form a protective gall even though the eggs are unviable?

Our gall wasp experiment is now two years old and we are starting to see some trends.

We recently moved all the trees into our warehouse to inspect them. Outcomes from these inspections are shown in the table below. During the inspection, we looked at the number of galls on each tree, the quantity of fruit and other observations such as incidence of pests.

Our citrus gall wasp experiment in June 2019 prior to harvest of fruit and “Prune in June” treatments to applicable trees.

After the initial inspection we performed the “prune in June” to the trees undergoing treatment one and two.

Our citrus gall wasp after the “Prune in June” treatment was applied to the trees in group 1 and 2.

Fruit were then harvested from the tree. Interestingly some of the trees (especially treatment 3) had lots of fruit, but they were very small. So we also weighed the total quantity of fruit harvested for each treatment.

There were a few interesting observations that we made about our citrus gall wasp experiment this year: 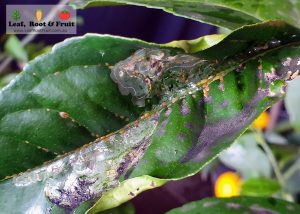 All of the trees were suffering from scale. Most of them also had signs of leaf miner and sooty mould. 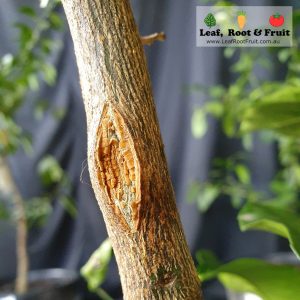 One of the trees (4A) was showing signs of collar rot. This is usually caused by poor airflow around the trunk. It indicates that it is time for us to give our depot a tidy up and make some more room for the trees to be spread out further.

Some of the citrus galls were quite large 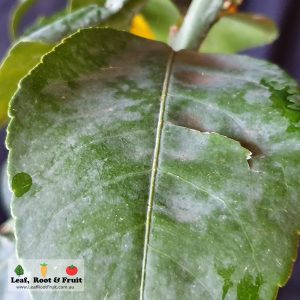 Kaolin clay was still visible on many of the leaves of the trees in treatment five.

This experiment will run for several years. We will be regularly observing  overall tree health as well as  productivity. Periodic updates will be added to this page as the results develop. We will also share them on our Facebook Page and in our newsletter. Sign up to the newsletter so that you don’t miss out on seeing the results.