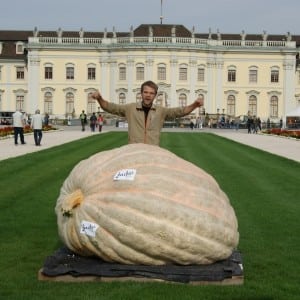 The biggest pumpkins come from the variety called ‘ATLANTIC GIANT’. The current world record for an Atlantic Giant pumpkin is held by Beni Meier from Switzerland, with a 2,323 pound Pumpkin, which is a whopping 1054 kg! 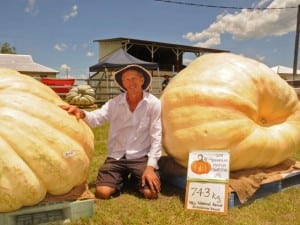 The current Australian Record is held by Dale Oliver, with an impressive 743kg Pumpkin.

There are hundreds of websites and books on how to grow giant pumpkins. Most of these guides are suited to growing pumpkins in Northern America, rather than here in Australia. We’ve taken the principles of Giant Pumpkin Growing and distilled it down into a simple to follow guide for Temperate Australian Conditions.

WHAT DO I NEED TO GROW A GIANT PUMPKIN?

The good luck plays a big part when growing Giant Pumpkins in temperate Australia, as our variable weather plays a huge role in determining success or failure.

Your patch should receive as much full sun as possible.

Optimally, you will need 50 square metres (approx. 7 x 7 m), to grow a giant pumpkin, but many have been grown in much smaller spaces.

Soil preparation is the most important thing you can do to help in growing a giant pumpkin. Soil preparation should be done from late autumn, into winter (or even very early spring). Add lots of organic matter, compost and manure, to the general planting area and dig it over.

If you are planting your pumpkins early (late September, or early October) you’ll need to protect them from the frost. Make a mini hoop house over your patch about a week before transplanting. This will warm up the soil and protect the plant when it grows. Use clear plastic sheeting to cover it.

One of the most important considerations when growing giant pumpkins is choosing the right seed.

An important decision when trying to grow a giant pumpkin is seed selection. Choosing your pumpkin seed can be like choosing a racehorse. Seed suppliers in Australia are somewhat limited, so you might have to go with whatever seed you can source. If you want to get really serious, you might like to try importing some seeds from North America. But, remember Australia has very strict quarantine laws, so make sure you research Customs regulations first.

In Melbourne, planting times for pumpkins are generally late October, avoiding frost damage. Recently, backyard tomato growing has seen a trend in starting earlier, and this could also be the case with pumpkins.

In North America, where the winters are colder, they propagate their seeds inside and transplant after the danger of frost has passed. You could try starting you seedlings off in August/Early September, in a hothouse and then transplant them later. But, be warned, these plants grow very quickly, so don’t start them too early, or they’ll take over your hot house.

If you want to take the lazy approach (which we use) plant your seed directly into the ground. Hill up a low flat mound of soil, about 1 metre in diameter and create a depression in the top (for watering). Plant your seed in the depression and water well. Keep the soil damp, but not saturated until the seed has germinated. Letting the soil get too wet may cause the seed to rot. 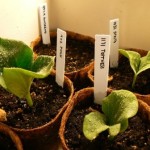 You can sow your giant pumpkins seeds early, in pots. Just make sure you re-pot them or plant them out before the roots start coming out the bottom.

On the other hand, if you’re really keen, you could start your seed off earlier (August/September) in a pot of seed raising mix. Keep it indoors, somewhere warm (but not hot). A close watch is needed, as the plant will grow quickly. It will be need to be either re-potted into something larger, or transplanted before the roots start growing out of the hole in the bottom of the pot. Use a liquid fertiliser when transplanting the seedling. Ideally use something containing seaweed which helps to promote root growth.

Later the plant will produce tertiary vines that grow off of the secondary vines. Usually growers trim these off so more energy can go into growing the fruit.

Keep your pumpkin vine well watered. The vines themselves will be putting down roots. To assist with producing the extra roots, cover parts of the vine in places with soil (just not on the leaves!). The soil should stay nice and damp at all times.

Weekly feeding is important if you are trying to grow a truly massive pumpkin. Every pumpkin grower seems to swear by their own specific formulations. The general rule is” Lots of Fertilizer, with the, right stuff, at the right time.” Start with a high nitrogen formula in the spring. Apply a high phosphorous fertilizer in advance of the blooming/fruit set stage. Finally, switch to a high potassium formula, for fruit growth and plant health.

In North America, there are many companies that sell specific fertilizers aimed at growing giant pumpkins. If you’re really keen you could source them out on Google and try importing them!

PROTECTING AGAINST INSECTS AND DISEASES

Many types of insects (and slugs) will damage your pumpkin vine and the fruit itself, especially where it is in contact with the ground. We recommend you use garlic sprays as a deterrent rather than harsh insecticides or chemicals.

Many pest hide in weeds and weeds suck up precious water so be sure to keep your pumpkin patch weed free.

POLLINATION (AKA THE BIRDS AND THE BEES)

Just like race horse owners, serious giant pumpkin growers like to keep track of their plant lineages.  To ensure the genetic lines, most growers hand pollinate so that they know who the mother plant and father plant are. This may be because they are looking for certain attributes such as bigger pumpkins, heavier pumpkins, more orange pumpkins, different colored pumpkins, and specific shapes.

If hand pollinating, it’s a good idea to pollinate all the female blossoms until you decide which one(s) you want to keep on the plant. Then once decided, cull all unwanted female blossoms and baby pumpkins, so the energy will go into the selected ones. Eventually you should cull your fruit down to only one or two fruits per plant.

If you choose to only grow one giant pumpkin plant and are not growing any other squash in the Curcubita Maxima family and don’t care about the genetic line for later seed distribution, then the bees can pollinate. 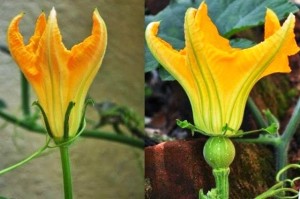 Positioning the fruit is important, as you don’t want the fruit to grow on top of the vine that is providing nutrition Optimal positioning of your pumpkin is perpendicular (90 degrees) to the vine but is not always possible. Start positioning the pumpkin relative to the vine when it is little. Gently move the pumpkin a few centimetres a day away from the vine until it will be clear of it when it gets bigger. This will reduce stem stress when it starts to really gain weight. Be very careful when moving, as it can snap or crack easily.

Your pumpkin stem should be free of any tension so it can grow upwards with the pumpkin. Cut any taproots that may have formed on either side of the pumpkin so the vine will be free from the ground at that point.

Build a shade structure with a tarp, or put shade cloth on your pumpkin, to protect it from sunburn and premature aging in the hot sun. If the skin stays soft the pumpkin will grow faster than when it hardens. If the pumpkins’ skin starts to harden it may cause the pumpkin to stop growing in size and start ripening.

Put 10 cm of sand under your pumpkin when it gets to be about the size of a soccer ball to keep it dry. Spread it out to a 1.5 metre circle to allow for the pumpkin to grow. If you wait too long, the pumpkin will be difficult to pick up and do this. Use two people to lift the pumpkin. Alternatively you could try growing your giant pumpkin on a large sheet of polystyrene. 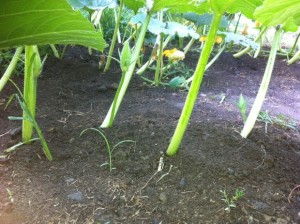 Train the secondary vines at right angles to the main vine to keep it in the stylized Christmas tree shape. When the vines start to get about 2 metres long, dig a 5 to 10 cm trench and bury all vines (but not the leaves) with soil as they grow out. This protects the vines from pests as well as promotes a secondary root system to really fuel the pumpkins growth. Allow about half a metre of open vine at the growing end unburied. Trim tertiary vines off of the secondary vines.

Growth will slow tremendously later in the season as the temperatures cool in the day and night. Put shade cloth and blankets over your plant when the temperatures fall below 15 degrees C at night.

When your pumpkin has stopped growing and is ready for harvest, cut it from the vine. Then you’ll need some heavy lifting machinery with lots of care to move it. You can even buy Pumpkin Tarps and Pumpkin Slings online to help you get your pumpkin to a weigh-off!

Remember to keep us updated with your giant pumpkin growing progress by sharing photos on the Leaf, Root & Fruit Facebook Page.

Looking to grow a giant vegetable but limited on space? Why not have a go at growing a Zucchini Tromboncino instead?