New Guinea Beans (Lagenaria siceraria), are an ironic vegetable. They’re not from New Guinea but actually from Africa – and, they’re not even a bean! They are actually a climbing edible gourd or squash – a member of the cucurbit family. Its common name comes from a taste similar to green beans.

New Guinea Bean is a bottle gourd with creamy white flesh that is similar to a zucchini. They’ll grow over a metre long. However, if you want to eat them as a vegetable, you should harvest them when they are about 30 to 40 centimetres long. The fruit of the New Guinea Bean can be dried and the shell used to make objects such as musical instruments.

The New Guinea Bean has a delicate white flower

New Guinea Bean plants are very vigorous. Last year, we grew them on our Giant Edible Trellis and they were the first plant to reach the top of the trellis. Following their showy display of large,scented, white flowers, they produce masses of tasty fruit.

They are a subtropical variety of squash, but they grow very well in Melbourne climates. You prepare and eat them in much the same way that you would a zucchini.

How to Grow New Guinea Beans in Melbourne

A well-drained soil needs to be prepared with plenty of compost and well-rotted manure. The plants are sensitive to frost. Hold off sowing the seed, until all danger of frost has passed, and the soil has warmed up. Wait until early November for most Melbourne gardens. You may be able to start at the beginning of October, if you have a warm microclimate. Alternatively, seeds can also be sown earlier in pots in for later transplanting when the soil has warmed up. 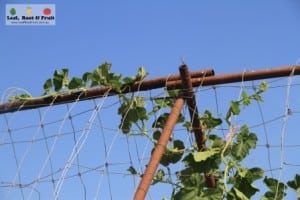 The plants climb vigorously – even more so than Zucchni tromboncino plants. Sow them next to a large trellis or high fence, so that they have plenty of room to grow. They’ll naturally creep and climb. However, it’s a good idea to train them so you can direct the plant to grow where you want it to grow. Otherwise, it will take over your garden! They don’t seem to cope well with strong winds, so it’s a good idea to protect them with a windbreak, if winds are an issue for you. If you want to grow some nice, long straight fruit, then they will need to be able to hang straight down. I found that the fruit are easily marked if they rub against the trellis wires.

We didn’t have any problems with pollination last year, and the plants produced plenty of fruit, without the need for us to interfere in the pollination process.

The plants will benefit from being well watered and will need to be positioned where they get full sun. 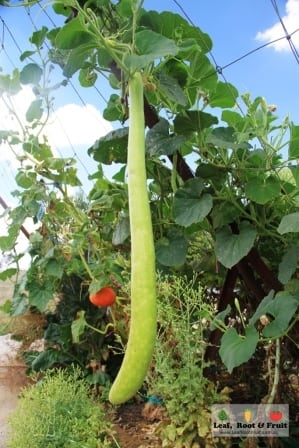 We grew this New Guinea Bean last summer. It ended up growing a whopping 122cm long!

20 thoughts on “How to Grow New Guinea Beans in Melbourne”