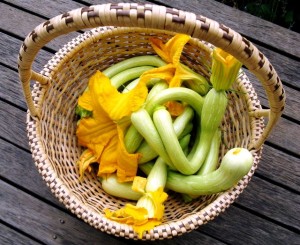 Zucchini Tromboncino is a heirloom vegetable common throughout Italy. Valued for its abundant, tasty harvests. It was developed in Liguria, in northern Italy. The fruit has a very pale green skin and can have varied faint white stripes like some zucchini varieties as well.  The really nice thing about this variety is that all the seeds form in the bulbous part at the end. That means you’ve got a whole long length of stem with no seeds.

Tromboncino is a highly vigorous variety of zucchini, growing easily to a height and width of 1.5 and possibly more depending on where it is situated in the garden. The good news is that it’s a vining plant, which means it can be trained up a trellis to make great use of vertical spaces.

How to Grow Zucchini Tromboncino 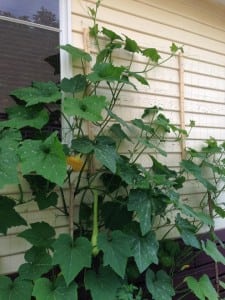 Zucchini tromboncino can be grown vertically to save space

In temperate climates, such as Melbourne, tromboncino seeds can be sown from late September, right through to late January. When sowing the seeds, make a small mound with a depression in the top. Sow two or three seeds in the depression about 4 cm deep. Water in well and keep the soil moist, until they germinate in a week or so.

Use large stakes, reo-mesh, or other trellis to train the vines vertically. Be warned, these vines grow really quickly, especially when the full moon provides enough night time light to support 24 hour growth.

Pollination is usually done by bees, but if you don’t see much bee activity in your garden, try helping them out, by picking a male flower, removing the petals and rubbing the remaining stamen inside the female flowers. The female flowers are identified by the baby tromboncino at its base.

For a better-tasting fruit, start harvesting them once they get about 20 to 30 cm long (They can grow over 120 cms in length.). One plant can put out two dozen fruit.

The winner of our 2015 Zucchini tromboncino competition

36 thoughts on “How to Grow Zucchini Tromboncino”