CH James Cafe, is a new cafe that launched in Station Street, Fairfield in December 2014. CH James Cafe is modern but features a “nod to yesteryear” with its compelling story of local Charles Henry James, who was prominent in the northern suburbs, in the halcyon period of Melbourne’s development. Charles Henry James was a businessman extraordinaire in the 1870s and 1880s, and hugely influential in forming the unique community dynamic of the north. 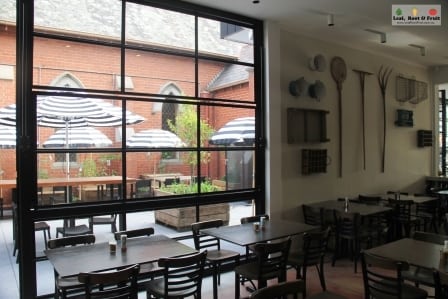 Inside CH James Cafe is open and light filled

Leaf, Root & Fruit are proud to have been involved with the set-up of the CH James Cafe edible courtyard garden. We’re also responsible for the ongoing maintenance. Like all gardens, it has been, and will continue to be a constantly evolving project. This practical, visually appealing and productive outdoor space is already proving a hit with the locals.

With large welcoming windows and bright spaces, the cafe feels light and airy. Fascinating farm implements adorn the wall, a reference to the period of CH James and heritage. The fit out is such that the indoors and outdoors meets seamlessly. The coffee bar opens out to Station Street, where many of the locals drop in to pick up their take away coffee. I might be biased, but I think that the highlight of CH James Cafe is the Edible Courtyard Garden.

A large courtyard, situated between the cafe and St Paul’s Church was our blank canvas for the edible garden. The aim of the garden is to provide as much produce for the cafe kitchen as possible. As well as being productive, the courtyard must function as a dining area. The courtyard has been furnished with bespoke seating, made from up-cycled apple crates. Each seating area has a significant space behind it for planting out.

In terms of growing requirements, there are a few limitations to this outdoor space. The tall church building to the north, casts shadows over much of the space during the middle of the day. The spaces that are not shaded by the building, are exposed to baking hot sun. This is amplified by reflecting off the large wall to the south. Most areas of the courtyard have access to morning and, or afternoon sun. In winter, the shadows will increase, to cover most of the courtyard space. With these limitations in mind, and in keeping with our philosophy of edible gardening, we have focused on growing leafy greens and herbs to supply the kitchen.

To add some visual appeal, we have planted larger trees such as olives, citrus and fruit trees. Two large citrus trees, a mandarin and a lemon tree were planted in large up-cycled apple crates. These trees are to act as a centerpiece for the garden and also supplement the shade provided by the cafe’s large black and white umbrellas. Unfortunately, the summer heat has taken it’s toll on the lemon tree and it dropped all of its leaves after the stress of being transplanted. We’re hoping that it will bounce back to its former glory over the next few months.

The staff have started to use lots of the leafy greens and herbs in the kitchen. I’m already looking forward to transitioning the garden from summer to winter produce. Over the next month or two there will be plenty of changes made to the outdoor space. Make sure you visit CH James Cafe regularly and sit with a coffee to watch the garden evolve.

Duncan bringing in the lemon tree