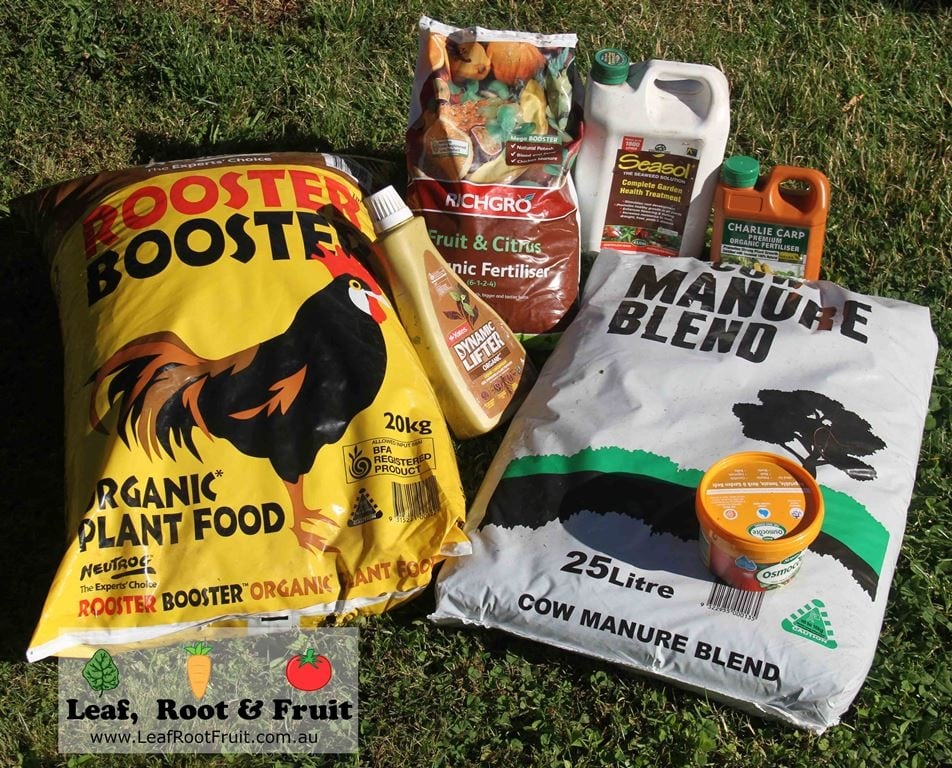 We purchased a range of “off-the-shelf” fertilizers from Bunnings and tested their performance.

We think our Hungry Bin Worm Farm is great. It’s easy to use, the worms love it, and it produces plenty of worm wee.

This summer we conducted an experiment to test the performance of a range of potting mixes. While setting that experiment up, we expanded it to investigate a range of “off-the-shelf” fertilizers (mostly certified organic ones). For those of us limited to major hardware chains and local nurseries, these are often the only viable ways to replenish the nutrients in our container gardens.

We compared nine different fertilizing regimes. All of them were purchased from “The Big Green Box” and covered a range of powders, pellets and liquid feeds. We also used the home-grown worm wee that we obtained from our Hungry Bin Worm Farm.

Each treatment was used to try and improve the plants growing in two different types of potting mix. Earthwise Multipurpose Potting Mix was the cheapest potting mix we could find. The Bulk Potting Mix from, Fulton’s Garden Supplies, what we would consider an “average” quality potting mix and was the second potting mix we aimed to improve with the fertilizers.

Setting up the fertilizer experiment 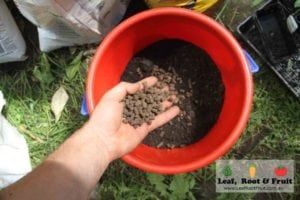 We mixed the powdered and pelletised fertilizers through the potting mix prior to potting up.

For both the potting mix and fertilizer experiments, we used capsicum seedlings. These were all relatively the same size, in the same condition and appeared to have been sown at the same time. We potted up five seedlings in each of the different potting mix/fertilizer treatment combinations. We tried to make sure that each soil had a seedling from five different punnets to reduce the chance of experimental error. Any powdered and pelletised fertilisers were mixed through the potting mix prior to use. Liquid fertilizers such as Seasol and Worm Wee were applied immediately after potting up and then every fortnight thereafter.

The potted-up seedlings were then placed in our greenhouse. The pots were alternated to ensure that the five pots for each of the soils were spread across the shelf. Each pot appeared to have equal access to light and water. The automated irrigation system watered every morning with a fine mist for 5 minutes. After six weeks, we assessed the plants and took photos of the results.

Results of the Fertilizer Experiment

We assessed each of the plants and recorded the colour of the leaves as well as the number of plants in each group that had set fruit. We also recorded the total number of flowers and fruit set on the 5 replicate plants combined. See the results tabulated below.

We also took photos of the plants. Below are images of the best plant out of the five replicates for each fertilizer type. As you can see there is a huge variation in the performance of each of the potting mixes.

The best plant from each of the 5 replicates. These plants have been planted in Fulton’s Bulk Potting Mix and treated with our selection of “off-the-shelf” fertilizers.

The best plant from each of the 5 replicates. These plants have been planted in Earthwise Multipurpose Potting mix and treated with our selection of “off-the-shelf” fertilizers.

So what do the results from our Fertilizer Experiment all mean?

Well, first there was a huge difference in the responses to fertilizing regimes shown by plants growing in the Earthwise Multipurpose Potting Mix vs the Fulton’s Bulk Potting Mix. It seems that even with the best quality fertilizers, terrible soil is difficult to improve.

For those of you with container gardens, you are unlikely to be watering your plants as frequently, or with as much water as in this experiment. The use of saucers under your pots will also help to retain nutrients and allow them to be taken back up into the potting mix. It would be interesting to see how the liquid fertilizers perform under these “more normal” sorts of conditions.

The best performing fertilizer was clearly the Osmocote Plus Trace Elements: Vegetable, Tomato, Herb & Garden Beds. However, this fertilizer is not certified organic. If you re after a certified organic fertilizer, then the Richgro Mega Booster Fruit and Citrus Organic Fertilizer is the best performer in our opinion. We would always encourage growers to improve their soil using home made composts. But for those of you with limited space, these products may be suitable for you to try.

On 01/05/17 we contacted the following manufacturers or suppliers of each of the products investigated:

We invite them to leave feedback on our experiment in the comments section below. We’ll look to repeat this experiment again in the future and would appreciate feedback from the public on how it may be improved to obtain even more meaningful results for our readers and gardening community.

Disclaimer: All of the products tested and materials used in this experiment were purchased by Leaf, Root & Fruit at full retail price. No incentives or sponsorship are received from any of the companies mentioned in this blog post.

If you would like further information on using fertilizers in the garden, then please sign up to our Science of Edible Gardening Workshop Series. The March workshop (repeated annually) in the series focuses heavily on optimising nutrients and fertilizers to grow nutrient dense food.

40 thoughts on “Which Commercial Fertilizer is Best?”