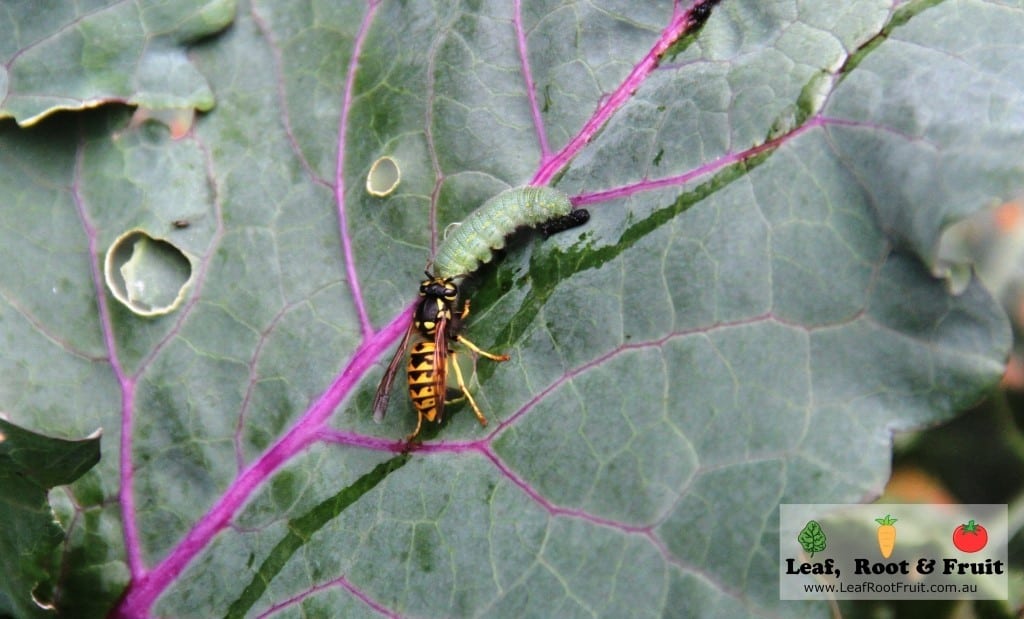 Could European Wasps actually be beneficial insects in the garden?

Last week I posted about controlling the damage caused by White Cabbage Moths in the garden. Since then, I’ve gone from removing ten to twenty caterpillars a day from the garden, to now only finding one or two. However, this rapid decrease in numbers has not been entirely due to the usual Predatory Wasps. This week I’ve noticed many European Wasps (Vespula germanica) flying around the garden bed and crawling through the leaves of the Brassicas. The wasps are actively searching out the caterpillars, chewing them into bite sized pieces and flying them back to their nests. Presumably, they are hoarding protein to survive the upcoming Winter. I’ve managed to video some of the action, please excuse my shaky camera skills – European Wasps are difficult to keep up with!

In Australia, European Wasps are often seen in quite a negative light. Since their introduction to the Australian mainland, in 1977, we have become fearful of leaving soft drink cans unattended for fear of swallowing one. Despite early reports labeling it as a ‘Killer Wasp’, no human deaths have been recorded in Australia. The European Wasp is here to stay and we’re learning to live with this “pest”.  Given my recent discovery in the garden, I’m wondering if European Wasps are starting to change from a “problem” to a “solution”?

A European Wasp eating a caterpillar

Can the European Wasp Also Help With Controlling Fruit Fly?

European wasps clean up fallen fruit in orchards and under backyard fruit trees. The wasps only seem eat fruit with damaged skin and I haven’t seen them touch intact fruit. The fallen fruit can provide an ideal breeding ground for Queensland Fruit Fly (Bactrocera tryoni). This fruit fly can cause significant problems in the horticulture industry and for home gardeners alike. The Queensland Fruit Fly is slowly making its way to Melbourne, it is already in Shepparton. Perhaps, European Wasps will help keep Queensland Fruit Fly populations under control too?

What do you think about European Wasps? Are they the bane of your outdoor social gatherings? Or do you also find them helpful in the garden?