Ask someone to draw a tree and they’ll likely neglect to include the root system.

Ask someone to draw a tree and often you’ll get something looking a bit like this.

But that’s only half of the picture. Usually, more than half of a plant exists underground. Yet, as gardeners we often neglect this fact and ignore the most important aspect of gardening… the soil!

Soil has an impressive food web of predators and prey. Earthworms, bacteria, nematodes, amoebas, invertebrates and fungi all coexist. They decompose organic matter and ultimately make nutrients available to feed our plants. “Soil” is different to “dirt” in that soil is living and dirt isn’t. “Dirt” consists only of particulates such as sand, silt and clay particles. It doesn’t have organic matter or living things.

When people try to grow plants in containers, one of the common pitfalls we see is the use of poor soil. Last February, at the Sustainable Living Festival, I presented on the topic of “Growing Food in Small Spaces”. For the presentation, I wanted to set up an experiment to highlight the importance of soil in obtaining great results. Here’s how I set up the experiment and what results we discovered!

Setting up our Soil Experiment 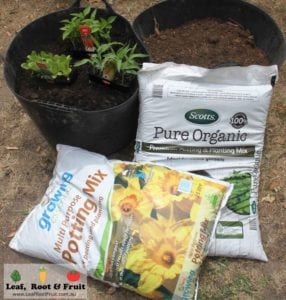 The different types of soil we used in our experiment

At Leaf, Root & Fruit we commonly use two types of soil for our garden installations. We use a premium blended soil in our cypress raised garden beds and wicking beds. It consists of two soils and three manures. For other projects where we need a lighter medium, we use a bulk potting mix blend. Both are ordered in bulk by the cubic metre. We get good results from both blends. However, they’re not practical for people to order if they are gardening in small spaces such as backyards and courtyards. I wanted to compare the soils we use, to what is more readily available to everyone.

So we made a quick trip to “The Big Green Box” and picked up a bag of the most expensive potting mix and also one of the cheapest. We then had four different types of “soil” to compare.

We also purchased a punnet of each of the following seedlings:

Each punnet had eight seedlings that were relatively equal in size and condition to the rest within that punnet.

We then potted up two of each variety of seedling into each of the four soil types. We watered them in well and then set them up against a north facing brick wall with each seedling getting equal access to natural sunlight. An automatic sprinkler system that watered each seedling relatively equally was set up. Plants were shuffled around every few weeks to ensure none of them were at an unfair advantage.

Once transplanted, all seedlings were watered in well

The seedlings were placed against a north-facing brick wall. An automated watering system was added after this photo was taken.

Duncan potting up corn for our soil experiment

The Results of our Soil Experiment

As you can see from the images below, there were some incredible differences between the different types of soil. For all three varieties of veggies, our bulk potting mix was the best performer. Our 5-way mix performed almost as well as this for the lettuce and chillies. For some reason the two corn plants died a day or so after transplant in this soil blend. Corn is notorious for not transplanting well, so I suspect that it was simply transplant shock rather than being specifically caused by the soil.

What was amazing was that despite one bagged potting mix being 5 times more expensive that the cheap bagged potting mix, there was virtually no difference in performance. Both were equally terrible, with stunted, horrible plants that looked washed out and suffering from many nutrient deficiencies. 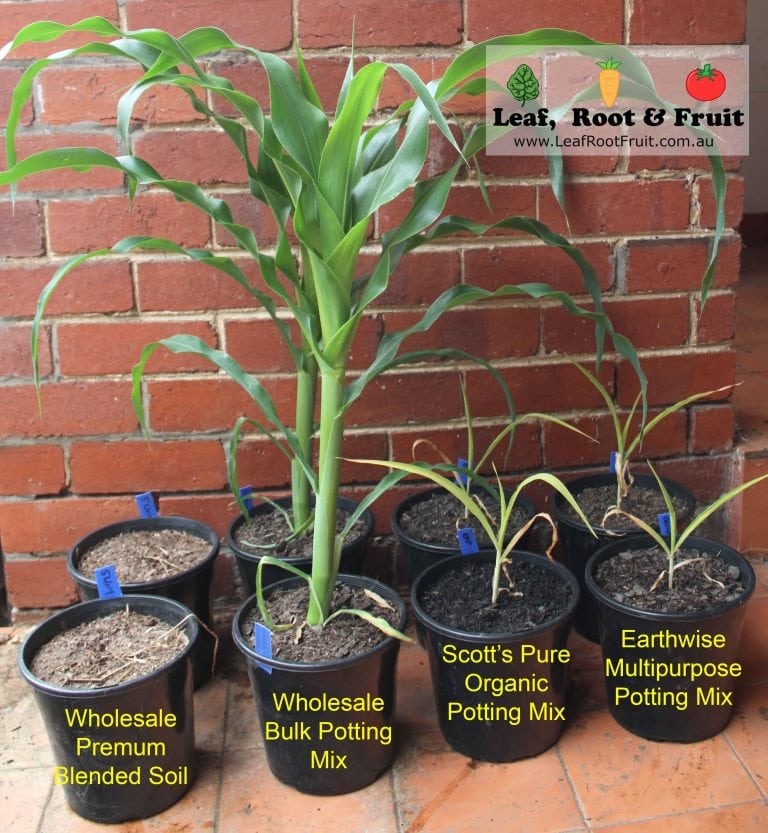 The soil experiment results for the corn seedlings 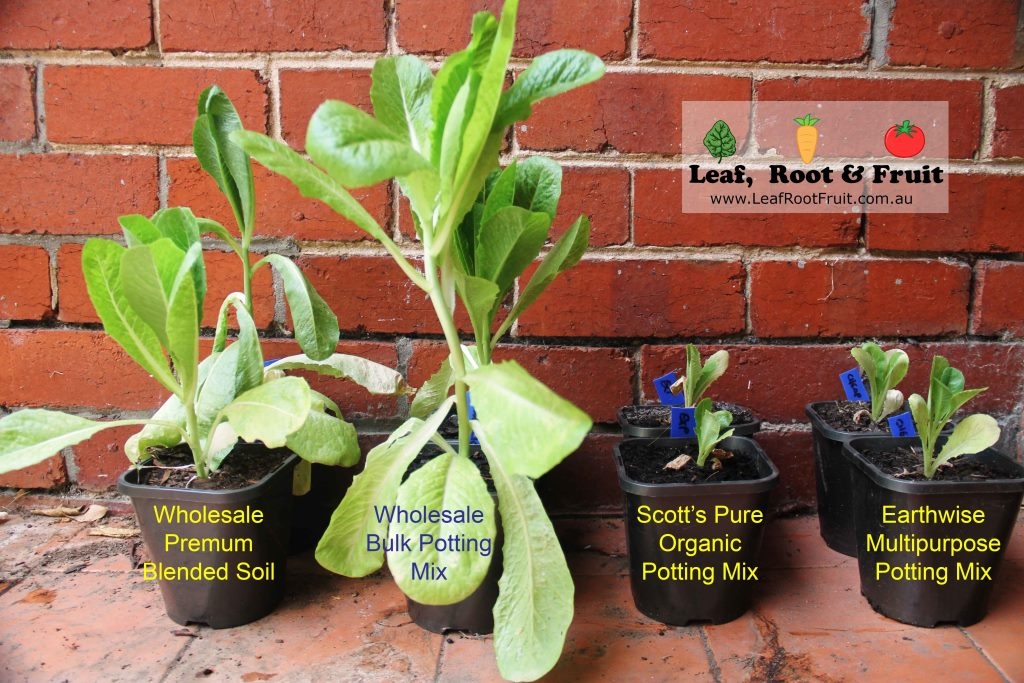 The soil experiment results for the lettuce seedlings 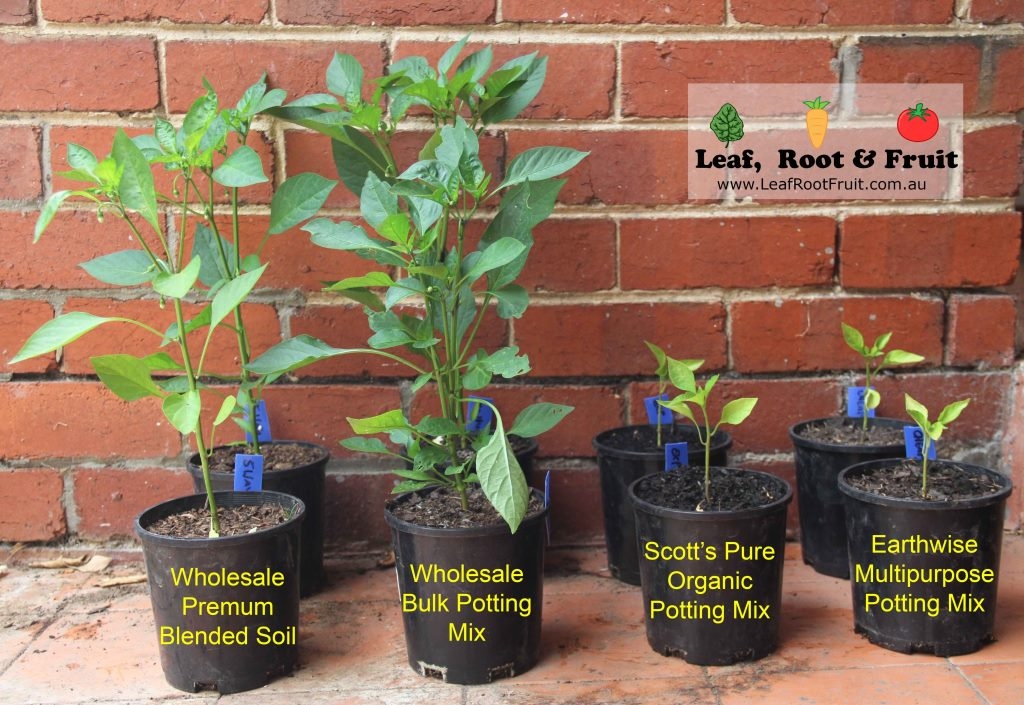 The soil experiment results for the chili seedlings

So what are the implications?

Well obviously, you all want to know where you can get your hands on some of the bulk potting mix that we use. Unfortunately, that’s not going to be very easy for you. So instead we’re going to have to find alternative ways around this. More than likely you’re going to have to enrich your potting mix with some fertilizers of some description to get your plants to thrive in pots.

Recently we expanded the experiment to test the performance of a wider range of potting mixes. We also test out a range of fertilizers (mostly certified organic ones) to see what combinations might work well for those of us limited to major hardware chains and local nurseries, for our container gardening supplies. We’ll continue to road test gardening products such as these. Sign up to our newsletter to make sure you don’t miss out on seeing the results.

7 thoughts on “Experiment: The Importance of Soil”