Last summer, we undertook a project to grow a giant edible trellis. Many of you followed the project quite closely and I know that some of you are going to be trying, something similar for yourselves this summer.

With that in mind, I’ve put together this blog post, with a few of the lessons that I’ve learned from the project. Hopefully, these comments will help you in growing a successful Giant Edible Trellis.

We’ll be having another go at the trellis this summer. Stay tuned to see how Trellis 2015-16 progresses.

I’ve also taken some photos from the Giant Edible Trellis project and mashed them into a time lapse video. Check it out!

Orientation of the Trellis

We orientated our giant trellis, with the openings underneath running east/west. This meant that we had a northerly aspect and southerly aspect. The trellis was situated that way for best fit of the site. Because of the summer sun angles, and the angle of the trellis, the southern side had plenty of sunlight.

I had expected that the plants to the north of the trellis would do better than those on the south. However, this hypothesis was correct for some plants and wrong for others.

I suspect that this was because the peas and beans were sown earlier, and the northern aspect helped to warm the soil and promote germination and growth.

Later, in the summer, the cucurbits on the south side had the soil and hence their roots, shaded from the sun. This would have reduced evaporation and keep them cooler.

It would be interesting to see how a trellis with easterly and westerly aspects, would perform in comparison.

Height of the trellis

At 250 cm tall, I didn’t think that the trellis was all that high, but amazingly only the New Guinea Bean really managed to fill the top space of the trellis. Hopefully this year, with different planting strategies we will get to see more of the varieties reaching the top of the trellis.

The Giant Edible Trellis became a giant tangle of vines

We grew many different edibles on the trellis last summer. All of them were grown from seed, and most of them were sown directly at the base of the trellis. We interplanted, the different seed varieties, at different times. This was because some plants grow faster than others. As such, certain plants were likely to dominate the growing space and limit development of other plants.

Planting was staggered, loosely based on leaf size. Beans and peas were planted first, cucumbers and watermelons planted next. Finally the larger cucurbits were planted. Once they were all in, it came down to survival of the fittest. My theory was that everything should be able to fend for itself, and that even though we’re planting at a very high density, we should get a decent crop from each variety.

However, we found that despite our staggered planting, many varieties got swamped. The peas and beans struggled against the larger cucurbits. Given this, and the fact that some varieties preferred different aspects of the trellis, this year we’ll keep the varieties fairly separate. Beans, peas, tree tomatoes and cucumbers will be planted on the north side. Large cucurbits will be planted on the south side. This also has the benefit, that everything can be planted early in the season. This is more desirable, than delaying the planting of the larger cucurbits, until the peas and beans are established.

The moon and stars watermelons struggled in the fierce competition of the trellis.

We found that the watermelons didn’t want to climb up the trellis. They really preferred to sprawl out along the ground. This may have been particular to the Moon and Stars variety that we trialed. Coupled with the fact that the watermelon plants got swamped by everything else, we won’t bother to grow them on the trellis this year. We’ll be growing them along the ground using this watermelon growing guide in future.

This was an interesting race to watch. The tromboncinos (and even the pumpkins) raced up the trellis first. Later in the summer, the New Guinea Beans really started to take off and easily beat everything else to the top. The New Guinea Bean also produced the longest fruit (122 cm) of any of the varieties. So, we’ll be using it this year for our annual growing competition. 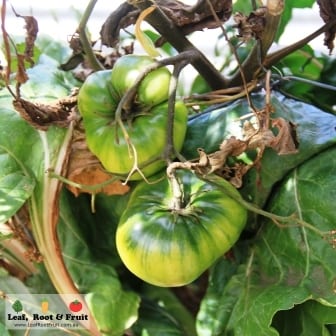 The giant tree tomatoes weren’t that giant after all.

These were the most disappointing new variety that we trialed. Admittedly, we didn’t sow the seeds until very late in the season, and as soon as they got going, they were overcrowded by the bigger cucurbits. We sowed some more tree tomato seed at the start of July this year, and are now developing them under glass.  Hopefully, we’ll get to see them reach their full potential, this summer.

Some of our biggest problems at the start were pests, such as sparrows and earwigs. Both these pests found our seedlings quite tasty and made it difficult to get our seedlings off to a fast start. This year we will be more proactive in protecting our crops, to prevent delays.

Training of Vines with Baling Twine

We had to do a lot of training of the vines to help them grow up the trellis. Being conscious of the environment, we re-used old baling twine to tie the plants up. Now that we’ve come full circle, and removed all the dead plants, we wish we had used sisal string. This string breaks down quite readily, so can be thrown into the compost with the plant material. An added bonus is that, it looks much better, than having pink and blue bits of baling twine everywhere!

In the first few weeks, we planted lots of leafy greens and herbs at the base of the trellis. These leafy greens really took off, and we had far more than we needed. It would have been preferable to include far more diversity in the range that we planted. We also could look at successive plantings to prolong the harvest. We now have thousands of self-sown lettuces and coriander everywhere!

We found the giant edible trellis to be an outstanding success. We grew many kilos of food in quite a small space. It was an interesting experiment and great fun to observe its progress. We can’t wait to get started with our new and improved plan this summer. Please check our website and Facebook page regularly for some progress updates.

Will you be having a go at a giant (or mini) edible trellis this year? What will you plant? Please keep us updated with your progress via our Facebook page or email.

The final harvest from the giant edible trellis.