Last summer we tried growing a small, experimental crop of peanuts, in a planter box. The trial was successful with quite a decent crop. This year we’ll be planting out a much bigger crop. Peanuts are easy to grow and great fun for the kids to grow. Here’s the Leaf, Root & Fruit guide on how to grow peanuts in Melbourne. 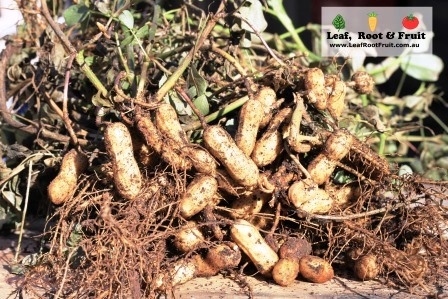 An experimental crop of peanuts that we grew. We’ll be growing them every summer from now on. 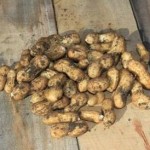 Peanuts are warm season crops and need four to five months of warm weather. In Melbourne, the most suitable months to plant peanuts are October and early November. They can be planted directly into the ground as soon as the winter ends. One mistake that we made last year, was planting the peanuts too late in the season (early January). They didn’t have time to mature properly. Even though the Peanut shells were large, often the kernels were fairly small and shrunk considerably when they dried.

Peanut plants need sandy and well-drained soil, avoid heavy, clay based soils. Make sure they are positioned in full sun. They’ll need to be watered regularly, maintaining a damp, but not waterlogged soil.

Peanuts, like all legumes, are known as nitrogen-fixers. This is thanks to the symbiotic relationship created between their roots and special bacteria. Peanuts are great for replacing nitrogen in soil that has been used for growing brassicas, celery, cucumbers, and tomatoes. We also think they’d be great to plant among sweet corn as a “living mulch”.

Growing Peanuts in Pots or planters?

Peanuts grow well in the ground, but growing them in a pot is almost as good. Just make sure that your pot or planter has a depth of at least 30cm and space for the plant to spread out. Peanut pods will grow and mature at the end of a stalk which is called the pedicel. The stalk is on top of the ground and the pedicel grows into the soil. The pedicel goes down about 5cm into the ground and forms after a flower has bloomed. So it’s important that your pot or planter has enough space for this to occur. If the plant grows out over the edges of the pot or planter, then the peanuts will not be able to form.

Which Peanut Varieties to Grow

There are four types of peanuts; Runner, Spanish, Virginia and Valencia. Runner is famous for making peanut butter. Spanish peanuts are known for their small size which is ideal for use as roasted snacks. Virginia has the biggest kernels while Valencia kernels are covered with bright red skin and are known for its sweetness. Simply select the type that you like the most. Keep in mind the size, texture, flavour and also the use. We grew Virginia Peanuts last year, and will be doing the same this year.

How to Plant Peanut Seeds 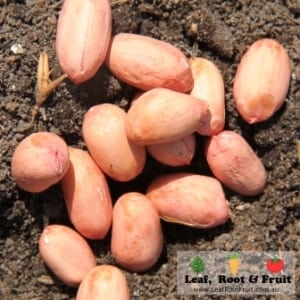 Peanuts are legumes and are closely related to beans and peas. There are various seed suppliers out there that sell peanut seeds. Otherwise, you can try your local health food store for raw peanuts, preferably in the shell. Avoid using roasted peanuts, as they won’t germinate. The peanut seed is the peanut itself. If in the shell, you will need to shell them before planting. Just make sure the thin brown skin on the kernel is intact. 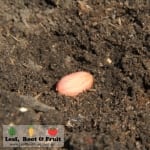 Last year, we planted the seed about 4 to 5 cm deep and about 10 cm apart in rows. The rows were spaced about 15 cm apart, this seemed to be a good use of space. Not all the peanuts germinated last year. Regardless of this, there was a good ground coverage when sown at this spacing. When planting the seeds, we suggest that you dig a hole to plant the seed, place the seed in very gently and then backfill. If you just push the seed into the soil, then the paper brown skin on the kernel gets damaged sometimes. Apparently damaging this skin stops the seed from germinating. 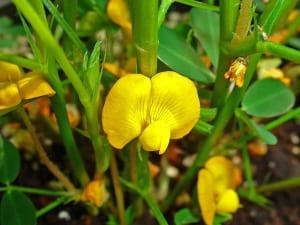 About a week after sowing the seeds, bright green pinnate leaves sprout. The plant grows fast and its buds open up into yellow pea-like flowers. As the flower dries out and withers away, a stalk which is called the pedicel grows from it and grows down 5 to 10cm into the soil. This is where the peanut pods will grow and mature. Once the pedicels have all grown underground, the ripening phase begins. At this point gradually reduce watering, until you stop completely.

The whole plant is pulled out when it is time to harvest. This is indicated by a yellowing of the leaves and plant die back. It’s a good idea to dry the peanuts for 2 weeks prior to eating them, or alternatively roast them.

14 thoughts on “How to Grow Peanuts in Melbourne”