This was my fourth year of growing watermelons in Melbourne. Surprisingly, watermelons are very easy to grow in our Melbourne climate. You use similar methods to those methods used in growing pumpkins, but they take far less space than your average pumpkin vine. If you can spare a few square metres of garden space, then I definitely recommend having a go at growing them. This year I even grew some on the shed roof! 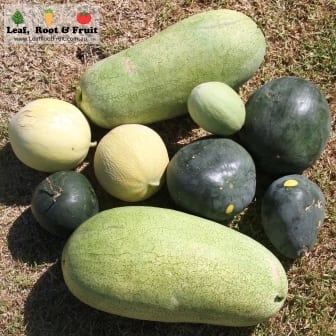 This year we grew several varieties of watermelon. We also grew Honeydew and Cantaloupe

When to Grow Watermelons in Melbourne

Watermelons originated from Central Africa and require a warm, humid climate. Most varieties are harvested 3 to 4 months after planting. So, to ensure that they have a long enough growing time over the Melbourne summer, they should be planted from mid-October through to early-November

Watermelon vines are sensitive to frost. So, ensure that you hold off sowing seeds until all danger of frost has passed. The seeds require warm soil temperatures. I have successfully germinated watermelon seed in pots, in a greenhouse, and then transplanted the seedlings. However, I find that the disruption of the seedlings during transplanting, means that any early start, is negated by the time it comes to harvest. If you do start plants indoors, then take extra care when planting out, so as not to disturb seedling roots.

Watermelon vines must have full sun to develop and ripen the fruit.

Preparing the soil for growing watermelons

Watermelons can tolerate a wide range of soil types. But, they do need good drainage.

Prepare the soil prior for planting by adding plenty of well decomposed animal manure or home-made compost. It’s best to avoid poultry manure or rich organic fertilisers as this can cause over production of male flowers at the expense of female flowers.

Create raised mounds of soil to improve drainage. Add a shallow depression in the top of the mounds to assist with watering and plant 2 or 3 seeds in the depression. When they germinate, thin out the plants, so that only the strongest seedling remains.

Allow an area of around 2sq metres per plant.

Seeds should germinate within 14 days providing the soil is warm.

Despite their names, watermelons don’t like any more watering than other veggie crops. In fact, over-watering them can result in bland, tasteless (although very juicy) fruit. Keep the soil moist with regular watering, but not waterlogged.

This variety of watermelon, called ‘Moon and Stars’ has yellow spots on both the leaves and the fruit.

Watering plants with liquid seaweed, compost tea or a commercial formula such as Seasol will help improve disease resistance and supply additional trace elements during the growing season.

Pinching out the tips of developing vines will help to encourage branching. This keeps the vines compact and can result in more fruit.

Just like other cucurbits, watermelons produce separate male and female flowers on the one vine. It is common for vines to initially only produce male flowers. When female flowers do form, they will always be far fewer in number than male blooms. 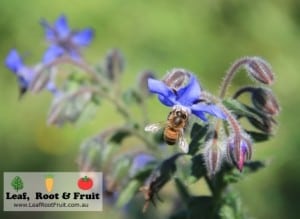 Bees are the main pollinators of watermelons with flowers most receptive to fertilisation during the early morning. Make sure you have plenty of companion flowers to encourage bees into the garden.

Just like zucchinis and pumpkins, watermelon flowers that have not been pollinated develop small, infertile fruit. These develop soft rot at the flower end of the fruit or turn yellow and eventually fall from the vine. Hand pollination is one way to ensure successful fruit formation, although with my watermelon crops, I haven’t had to resort to this method yet.

Each plant can be expected to produce three to six fruit, providing they are watered regularly and receive adequate nutrition.

Caterpillars can occasionally feast on watermelon vines. Most are picked off by birds, or you can conduct regular “search and destroy missions”.

Aphids love to feed on new shoots. These sap sucking insects can spread virus diseases. There is no control for virus affected plants and virus diseases can be transferred to the next generation of plants via infected seed. Aphids can produce a substance called honeydew. This can promote sooty mould and debilitate the plants. See our guide to controlling aphids for dealing with these pesky critters.

As fruit approaches maturing, you will need to protect it. Rats, mice, crows and possums all find watermelons tasty too!

How do you know when to harvest your watermelon?

Just like harvesting pumpkins, the traditional practice for determining ripeness is to tap the fruit and listen for a hollow sound. Deterioration of the vines including shriveling of the tendrils on the fruit stem is another sure sign that your fruit is ripe for the picking.

Watermelons have a variable shelf life according to variety. When harvesting the fruit, be sure to clip a short section of stem with the fruit rather than pull it from the vine. This will minimise damage. Handle watermelons carefully so as to avoid damage to the skin.

Exposing harvested fruit to sun and heat will cause skin scalding and deterioration of the flesh. Once the watermelon is cut, it can be stored in the refrigerator and chilled for eating. However, the melon should be eaten within a few days.

There are many heirloom varieties of watermelon available to gardeners in Melbourne. Varieties can produce fruit varying in weight from less than 4 to over 18 kilograms. The flesh may be red, pink, orange, yellow, apricot or white depending on the variety selected. Skin colour is also extremely variable with many different colours and patterns. 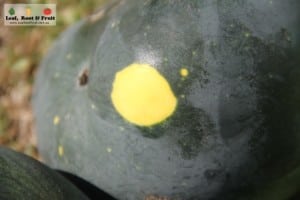 Moon and Stars watermelon has stunning yellow markings on them resembling moons.

Large oval fruit, with dark green skin dotted with large yellow moons. Yellow flecks that resemble tiny stars are also found on the fruit and the foliage. Flesh is sweet and pinky/red in colour. The fruit keeps longer than other varieties. This was the first year that I grew Moon and Stars. I found this variety to be unreliable and poor yielding. Although, I may just have had a bad batch of seed. We tried growing this variety as part of our Giant Edible Trellis, but the vines suffered from powdery mildew and we only harvested one insignificant fruit off a total of 4 vines. Interestingly, the plants refused to climb and instead preferred to sprawl along the ground. 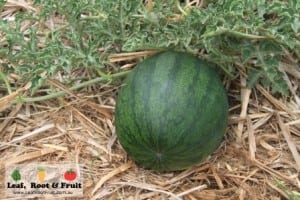 compact vines. It is ideal for home gardeners, because of its smaller size (both vine and fruit). This has been my most successful variety of watermelon. The small plants don’t take much space, and they were the variety I planted on the shed roof this year. The fruit are easy to fit in the refrigerator to chill and are a perfect portion size for one or two people. 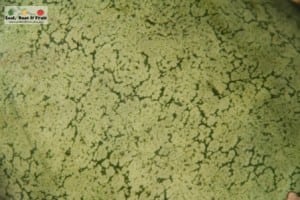 Let’s face it, a variety watermelon with the name “Icecream” has got to be good. Named for its unusually high sweetness, this variety of watermelon has huge fruit. This year I harvested one that weighed 7.4kg! The skin has a light green tiger stripe pattern on it.

Watermelon varieties that I haven’t grown yet, but will trial next season:

It is an early maturing variety which, suits Melbourne’s cooler climate, as it is tolerant of a wide range of climates [including cooler temperatures, drought and heat].

It is round like a soccer ball, with dark green rind and sweet red flesh.

A small round fruit, striped green and yellow, with a sweet pale yellow-white flesh. This watermelon splits when it ripens, so you’ll never see it in the shops.

A big, oblong watermelon with light green, tiger striped rind. The flesh is a bright orange colour with excellent flavour. It is a very productive variety.

A round, light green fruit with dark stripes and thin skin. It has sweet red flesh with small seeds.

Apparently it has good disease resistance and is suitable to many climates and soil conditions. Stores well.

Have you had a go at growing watermelons in Melbourne? How did they turn out?

12 thoughts on “How to Grow Watermelons in Melbourne”