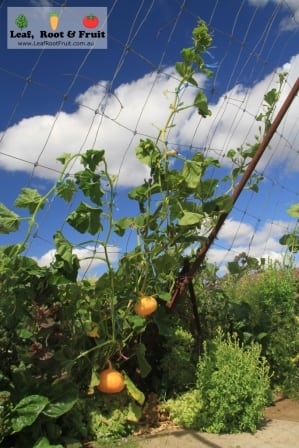 The pumpkins and new guinea beans are racing to the top of the trellis.

The race is on! One of the Potimarron Pumpkin vines looked as if it was on track to be the first to reach the top of the trellis, but in the last week, it has been overtaken by the New Guinea Bean vines.

The New Guinea Bean has soft, feathery leaves and unusually for cucurbits, white flowers that are quite delicate. The vines are starting to develop female flowers and we should be harvesting our first  fruits within weeks.

The Potimarron pumpkins already have two well developed fruit on them. This development of fruit has probably slowed the growth of the vine, and allowed the New Guinea Bean to catch up and overtake it.

The other vines that have been going crazy are the Tromboncinos. The vines haven’t quite made it up the trellis as far as some of the other vines. However, they are covered in masses of fruit. Each vine has 3 to 4 fruit set on it. This week we picked our first two fruit.

The giant tree tomatoes are about a metre high, but are starting to get lost in the tangle of cucurbit vines. There are a few flowers on one of the plants.

The moon and stars watermelon vines are staying quite low to the ground and don’t seem to like climbing at all. I can’t see any fruit set on them.

A lot of the leafy greens are going to seed. However, the silverbeet is looking great. The leafy greens are helping to create a microclimate at the base of the trellis to retain moisture and protect the roots of the larger vines.

The sunflowers in the companion flower bed, have been ravaged by birds such as cockatoos. But, the borage and cornflowers are still attracting plenty of bees into the area.

Some of this weeks’ edible trellis harvest, Tromboncinos and Beans.

There’s plenty of new female flowers developing on the tromboncinos.

The sunflowers in the companion flower bed have been demolished by the birds.

Each tromboncino vine has 3 to 4 fruit set on it already.

The New Guinea Bean has a delicate white flower

There are two potimarron pumpkins set on the vine already.

The giant edible trellis is really starting to take shape.