We all know that trellises are great for maximising our use of space by growing plants vertically. Quite often they are used in edible gardening for growing cucumbers, beans, peas and other vine veggies. I’ve come across a few images on Pinterest that have inspired me to get out in the garden and try something a bit different.

An awesome hut frame for runner beans to grow over

Runner bean tee-pee for kids to play in

For more of the Pinterest images that have inspired me, check out our Giant Trellis Project board.

We’re going to put together an experimental giant trellis and grow many varieties of edible plants all over it. The trellis project aims to grow as much food as possible, in a small area. We’ll be growing quite a few varieties of plants on the trellis, some of which I’ve never grown before. We’re attempting this project on the family farm at Mickleham. My mother, Denise already has quite an extensive veggie patch growing there and will be helping me with the project.

When running the project, we will aim to

As this is an experimental project, to show our audience how easy and low maintenance growing your own food can be, we’ll aim to keep the set-up and ongoing maintenance as simple as possible. This will include the use of no-dig garden beds. We will choose varieties of plants that need little more attention than planting, watering and harvesting. We’ll keep you posted on this blog page and through social media about everything that we do regarding this project. There’ll be no trick photography, and no pretending it all went perfectly if it didn’t. This is an experiment, I have an idea in my head of how it will turn out, but who knows what will really happen!

We often hear people complain that it’s too difficult to grow a worthwhile amount of food in small spaces. This project will hopefully show that by using this technique, those with small backyards can still grow a large amount of food, without losing too much of their outdoor space. By growing many varieties of edibles, we’ll hopefully avoid a glut of one particular type of produce. We’ll keep you posted on our weekly harvest from the project, and give you a final tally at the end. Then you can make up your mind if you think it is worthwhile having a go yourself on whatever scale suits your outdoor space.

As you can see from the Pinterest inspiration photos, many of these trellises are quite amazing works of art. The pumpkins and gourds hanging down from the trellis look like nature’s chandeliers. Some of them, such as the children’s tee-pees and the bean shelter can also be quite functional. The Mickleham-Kilmore bushfire earlier this year caused a large amount of damage to the family property, including Mum’s house. In the fires, we lost many of the trees in the house yard, as well as the pergola, which has not yet been replaced. This trellis will not only form a support for growing plants, but it will also offer a shady spot to sit outside on a hot, summer day and read a book, or have lunch. It’ll also be a great sun-smart place for my young niece and nephew to play.

The plan for the Giant Edible Garden Trellis

We plan to build a structure, strong enough to support the growth of quite a large amount of produce. To keep it simple, we’re going with an elongated tee-pee shape. The structure will be built as cheaply as possible. We’re using some old steel water pipe, reclaimed fencing mesh and star pickets, meaning the cost for us is zero. But, I’m sure you can pick up similar materials fairly cheaply from a scrap yard. For those of you really keen, using builders scaffolding would be ideal for this project. You could also use timber for the frame. 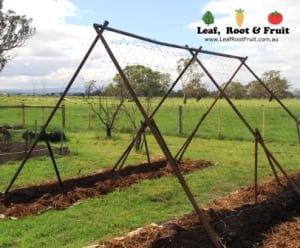 The Giant Edible Trellis Frame is made from steel pipe, re-claimed fencing mesh and star pickets

We’ll be growing many different edibles on the trellis. All of them will be grown from seed, and most of them sown directly at the base of the trellis. We’ll be sowing the different seeds at different times, this is because some plants grow faster than others, as well as certain plants are likely to dominate the growing space and limit production of other plants. We’ll stagger our planting loosely based on leaf size. Some plants, such as beans and peas can be sown earlier on in spring, whereas pumpkins need to be sown a bit later. So we’ll be taking that into account too. Once they’re in, it’ll come down to survival of the fittest. Our theory is that everything should be able to fend for itself and that even though we’re planting at a very high density, we should get a decent crop off each variety. The plants we have selected to grow on the trellis are as follows:

We’re going to grow several different varieties of beans including a purple variety to add colour to the project. We’ll also grow snow peas for a tasty summer snack. The beans and peas are legumes, which mean they fix nitrogen and return it to the soil. This nitrogen will help to feed other varieties’ of plants, and is a form of companion planting. Beans and snow peas are very fast growing, so we’ll be sowing them early so they can get a head start up the trellis before the larger leafed pumpkins and tromboncinos have a chance to choke them out. They will still germinate in September when the soil is still cold. We’ll be sowing far more beans and peas than we’ll need. Any excess will be blanched and frozen for use in the winter.

We’ll be growing telephone cucumbers up the trellis. This is a dark green, smooth skinned variety that produces heavy crops. They will be planted in the second phase of seed sowing.

I had never heard of the tree tomato before. But when researching some new seed varieties I came across these. I’m a bit dubious about buying seed off eBay, but in this instance it was the only place I could find them. I ordered them last week and hopefully they will arrive soon. I have no idea how they will grow, but they apparently can send out vines up to 6 metres in length. This is a variety that I will be sowing seeds in trays and then transplanting, hopefully in phase two of planting

This is another variety I’ve never grown before. Sourced from Diggers these so-called beans can grow up to 1.5m long, but are apparently best eaten like a zucchini when 15cm long. These seeds will be sown in phase three of planting.

We’ll try growing an old heirloom watermelon variety called ‘moon and stars’. This variety produces fruit with red flesh and a skin covered in yellow spots resembling moons and stars. The thick skin enables storage throughout the winter. We’ll be planting the watermelons in phase two of seed sowing.

Many of you will already know about Tromboncinos from our competition that’s currently running. We’ll be sowing a few tromboncinos along the trellis and think they’ll look great dangling down through the canopy like long chandeliers. Tromboncinos are fast, vigorous vining plants, so they’ll be sown last.

Because we’ve always had a lot of space out at Mickleham, I’ve never bothered to trellis pumpkins. If you have the space, I think Pumpkins are better growing along the ground. This is because the plant puts down roots all along the vines, giving them extra nutrient and water sources. However in the interests of the experiment, will be growing them vertically too. We’ll be planting several different varieties:

All three varieties grow fairly small pumpkins, which should prevent the trellis from overloading and the vines from snapping. Along with the tromboncinos, these will be the last seeds to be sown as part of phase three.

Have you tried a project like this before? Got any hints, tips or suggestions for us? Let us know in the comments below.

2 thoughts on “Vertical Gardening on a Giant Edible Trellis: Our latest project”