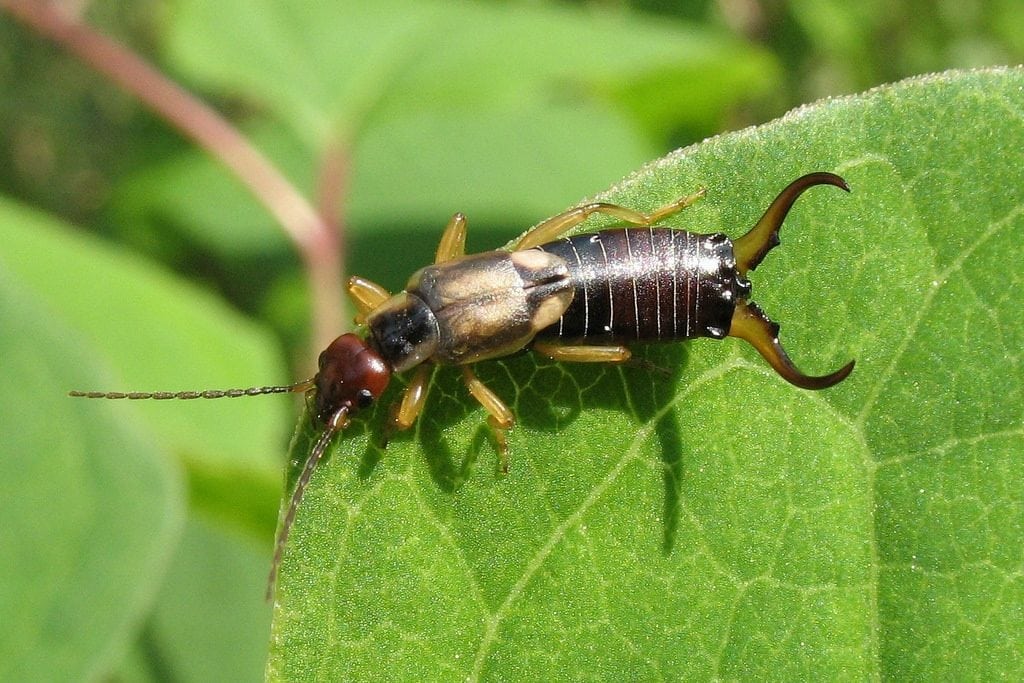 Earwigs are common unwanted visitors to most gardens in Melbourne. They can be quite prevalent in October, which is coincidentally, the time that many of us are looking to plant out our summer veggies. Earwigs can cause significant damage to young seedlings, but are quite fussy about selecting which ones to attack.

This spring, I am noticing them in large numbers in our garden. They are causing a lot of damage to the tender, young shoots of the deciduous fruit trees foliage as the trees wake up from their dormancy. They seem to have a particular liking for the new growth of my potted pear tree espaliers. Earwigs also seem to prefer:

They’ll also have a go at tomatoes, brassicas and other leafy greens, but they don’t seem to cause as much damage to these varieties as the ones above.

Earwigs cause their damage at night time 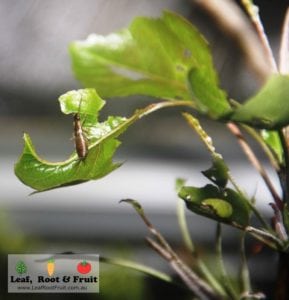 Earwigs are nocturnal and only come out to feed at night. As such, often they go unnoticed until they have caused a lot of damage. The damage caused by earwigs is different to that of slugs or other leaf chewing pests. Earwigs tend to eat lots of small holes in the leaves of plants. Usually these holes are in the middle of the leaf, rather than around the edge of the leaf. An absence of slime trails is another indicator that earwigs and not slugs are causing the damage. If you’re still not sure, then the best way to diagnose the problem is to try and catch them in the act.

Wait until an hour or two after dark and then grab a torch (a head torch is ideal) and head out into the garden. Check the plants with the most damage for signs of earwigs on them. The earwigs are not too difficult to spot if they are around.

Why not take the kids with you for a bit of fun? If you’re lucky, you might also come across many other nocturnal minibeasts. Last night on my late-night wander through the garden I had an” up close and personal encounter” with a Tawny Frogmouth!

Once you’ve made sure that earwigs are causing the problem, it’s time to do something about it. Earwigs are one of the few garden pests that I actively try to control. But I only do so when they are causing significant damage. Once plants get large and established, a few earwig bites aren’t going to be a major issue for them. However, for small seedlings such as beans – it can cause entire crops to fail before they even had a chance to get growing. Here is a few” earwig control” methods that might work for you. 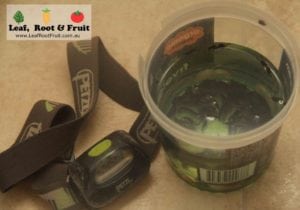 Earwig control tools – A head torch and a tub of soapy water!

This is my favourite control method for earwigs. Although it requires you to be quite proactive! You’ll need to don your head torch and go on nightly patrols of the garden. Mix up a strong soapy water solution by adding approximately one part dishwashing liquid to ten parts water. Then you can add this to either a spray bottle or a small bucket or margarine container.

Once you spot an earwig you can either squirt it with the spray bottle (the fun way) or knock the earwig into the container of soapy water (the sensible way). Earwigs breathe through pores in their skin. The soapy water reduces the surface tension and prevents them from breathing. The effect is quite rapid and the earwigs are despatched quickly.

Keep in mind that all insects breathe this way. So if you use a spray bottle to squirt the earwigs, you may also be killing beneficial insects that get caught up in the spray. That’s why I tend to use a container to knock them into, there’s less collateral damage.

Another method of controlling earwigs is to use baited jars. I’ve heard of people using various soy sauce and oil concoctions. However, the method that I find works well is linseed oil. Simply put a centimetre of linseed oil into an old glass jar or coffee mug and bury it in the soil so that the lip of the vessel is level with the soil. The earwigs will be attracted to the smell of the linseed oil and fall into the jar and drown in the liquid.

This method seems to work really well some nights and catch tens of earwigs per container, then the next night catch nothing, even though there’s still plenty of earwigs around. I’m really not sure why!

Be sure to remove the jar from the garden before it rains, or the jar will fill up and the oil will be the first to spill into the garden. You could try burying the jar on an angle to stop the rain getting in.

Scrunched up Newspaper in pots

This is a very old control method for earwigs, although I don’t find it very effective. Simply scrunch up some newspaper and stuff it into an old plant pot. Leave the pots lying around the garden for a few days. The earwigs will take up residence in the pot and then all you have to do is discard the paper in the bin (or shake it out in the chook run for a protein rich treat).

I’ve heard of people stuffing the newspaper into terracotta pots and then burning the paper every few days. Although I’m not sure how effective this would be. 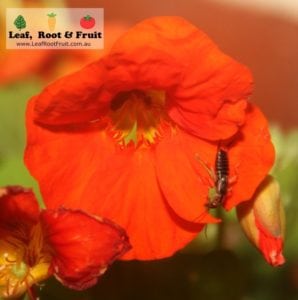 Earwigs seem to love nasturtium flowers, so consider using them as a sacrificial crop.

Why not try a few sacrificial crops? I’ve noticed that earwigs really love nasturtium flowers (they don’t seem to touch any other part of the plant). So plan ahead and have some nasturtiums covered in flowers for next spring. The earwigs will be attracted to the flowers and hopefully, not so much to your seedlings. At the very least, it makes it fairly easy to go hunting for them and reduce their numbers when the time comes. Nasturtiums are also a great sacrificial crop for white cabbage moth. Possums don’t seem to like them so you can use them to hide young seedlings among their growth until they get established. They’re also edible and make a great ground cover, so there are many reasons to plant some in your garden.

Do you have a tried and tested method for the control of earwigs in your garden? If so please let us know in the comments section below so that we can incorporate them into this post.

12 thoughts on “How to control earwigs in the garden”