Skip to content
Home » Edible Gardening Blog for Melbourne Based Gardeners » How to Grow » Three Sisters Gardening, an ancient form of Companion Planting

The three sisters have been grown in the past on these amazing terraces in the Colca Canyon, Peru.

During 2012, my partner Caryn and I spent a gap year in South America. During our trip we developed a keen appreciation of the agricultural practices of the local inhabitants. One of the ancient planting techniques still used there today is the ‘Three Sisters’, a fantastic companion planting technique. 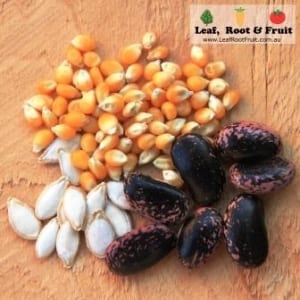 The three sisters seeds: corn (or maize), squash (or pumpkin) and beans.

According to legend, corn (maize), beans, and squash (pumpkin) are three inseparable sisters who can only thrive when grown together. The ancient wisdom dictates that corn especially must grow in community with other crops rather than on its own. It needs the beneficial company and aide of its companions to thrive. Corn, beans and squash were among the first important crops domesticated by ancient Mesoamerican societies. Corn was especially important, providing more calorie yield per area than any other. 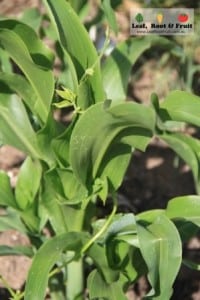 Beans use the sweetcorn as a living trellis

Put into practice, the corn provides a structure for the beans to climb, eliminating the need for poles. The beans provide the nitrogen to the soil that the nitrogen hungry corn and squash utilize. The squash (or pumpkin) spreads along the ground, blocking the sunlight, helping prevent establishment of weeds. The squash leaves also act as a “living mulch”, creating a microclimate to retain moisture in the soil, and the prickly hairs of the vine deter pests. Corn lacks the amino acids lysine and tryptophan, which the human body needs to make proteins and niacin, but beans contain both. Squash yields important vitamins from the fruit. Growing all three crops helped the ancient Americans to provide a balanced diet.

Things to consider when trying your own Three Sisters Gardening technique: 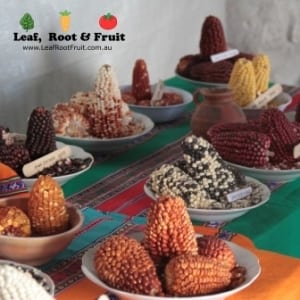 There are hundreds of varieties of maize or corn grown in South America. Most of them are dried on the cob for storage.

Be aware that the varieties of corn, squash and beans grown by the Native Americans were typically grown for drying. The three varieties of plant were allowed to grow to full maturity and then were harvested all at once, at the end of season. We tend to use modern cultivars of sweetcorn in our veggie patches. These need harvesting well before maturity to retain the flavour by preventing the sugars being converted to starch. Similarly, we tend to eat our beans fresh, or we blanch and freeze them. Therefore, if you want to have a go yourself, you’ll need to modify the technique slightly to accommodate this.

If you try growing your sweetcorn in a typical modern block of rows formation and apply the Three Sisters technique, then you risk creating a problem of access for harvesting. You’ll get overrun with squashes and possibly beans. Traditionally the Three Sisters used a circular planting pattern. Consider an arrangement of using squashes or pumpkins in the middle and corn and beans in rings around the outside.

Success with a Three Sisters garden involves careful attention to timing, seed spacing, and varieties. If you simply plant all three in the same hole at the same time, the result will be a snarl of vines in which the corn gets overwhelmed. You will need to let the sweetcorn get a head start to prevent this. Usually you should plant the sweetcorn seed, wait two weeks and plant the beans and then wait a further two weeks prior to planting the squash or pumpkin.

Why limit yourself to beans and squash for your sweet corn companions? We’re planning on using similar companion planting principles but with different varieties. Just remember, that the legumes fix nitrogen in the soil and are included to feed the hungry corn plants. So make sure if you substitute the beans, that you swap them for a similar legume. Some potential substitutes for beans:

Consider substituting squash with other cucurbits, such as:

Be careful with your choice of cucurbit. They are vigorous growers, and may end up taking over! 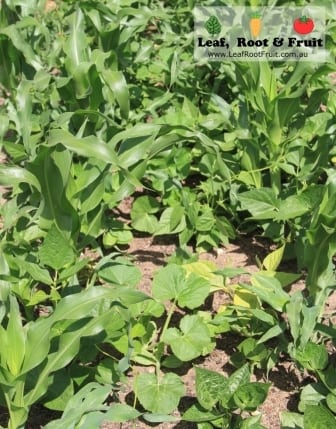 One of our three sisters garden beds

Size of your Three Sisters Garden

The size of the plot you dedicate to Three Sisters gardening in is not overly important. However, we recommend that every time you grow sweetcorn, that you plant enough seed to ensure that you have at least 30 plants. Any less than this and you will likely run into issues associated with poor pollination. Poor pollination is evident if you grow deformed, or underdeveloped cobs.

The squash (or pumpkin) does a good job at preventing weeds and creating a microclimate. However, we’ve found that during the harsh Melbourne summer, that a good layer of straw mulch helps to retain a lot more moisture in the soil than just by growing pumpkin vines alone. Early on in the growing season, when the pumpkin plants are smaller and the sweetcorn requires plenty of water, this supplementary mulch is especially useful.

I’ll be using a few variations of the Three Sisters gardening technique this summer. What about you? Are you going to give it a go? Which combination of cultivars will you be using?