When people try to grow plants in containers, one of the most common pitfalls that I see, is the use of poor quality soil, or potting mix. Last summer we conducted a small experiment to demonstrate the importance of soil in growing great veggies. We produced some very interesting results from the experiment, and generated quite a deal of interest from our gardening community.

This summer, we expanded the experiment to cover a wider range of potting mixes. We also investigated a range of off-the-shelf fertilizers (mostly certified organic ones). This was to see what combinations might work well for our container gardening supplies, for those of us limited to major hardware chains and local nurseries. We wanted to see their effectiveness at improving the plants’ ability to grow in poor quality soils. See our blog post on our Fertilizer experiment for more information on this. 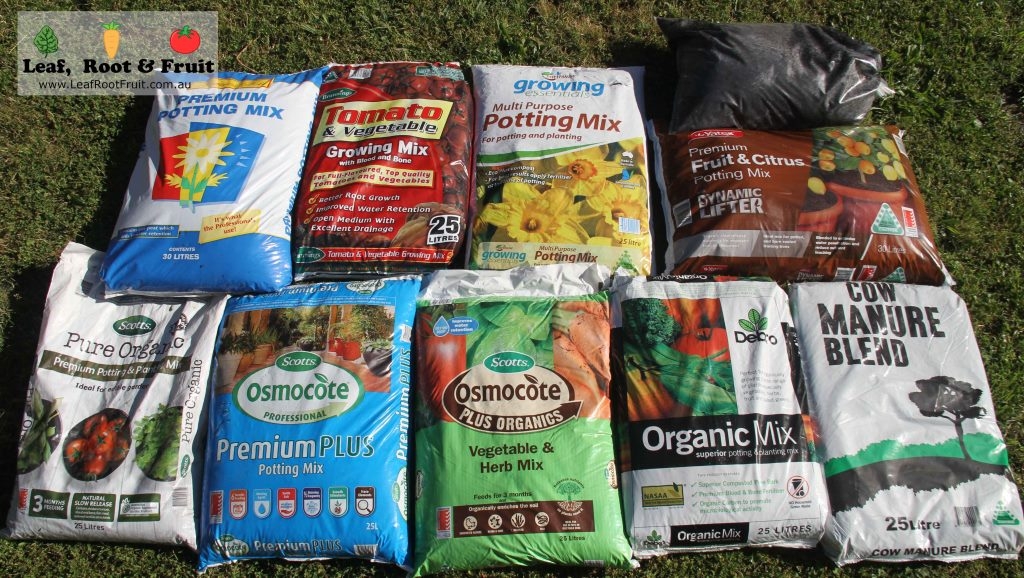 Ten of the different potting mixes we trialed in our experiment

*Update 22/10/20. At the time of purchase we were led to believe that the Fulton’s Potting Mix did not meet AS 3743. On 12/10/2020 we were contacted by a representative of Fulton’s (which was over three years since contacting the company for feedback via email). They have informed us that their potting mix does in fact meet the Australian Standard.

With regards to the 5-Way Mix the Fulton’s representative stated “….the product was tested, not as it was intended to be used. The 5way soil is a garden blend  and not a potting mix. It is meant for garden beds, not pots. We would never suggest that it be used like this and would not expect it to perform well, if it was.”

All potting mixes, except for the Scott’s Premium Organic Potting Mix were purchased no more than the week prior to the experiment being set up. The Scotts Premium organic mix was a bag left over from our first experiment from last year. The bag had been sitting, opened, but under cover for 12 months.

We had only intended to use 10 potting mixes and soils. However, when purchasing the products for our fertilzer experiment, I came across the Fine Farms Blended Cow Manure. The word “blended” piqued my interest and upon reading the product description, it sounded more like a growing medium, than a soil conditioner. So we decided to use this as an eleventh “potting mix” in our test.

Of the 11 mixes tested, four of them were the same products tested in our first experiment from last year:

What does potting mix that complies with the Australian Standard (AS 3743) mean?

Potting mixes can be certified to Australian Standard AS 3743. Redtick, or premium grade potting mix include a minimum supply of nutrients from fertilizers such as a controlled release fertilizer. They may also have and other additives such as water crystals and wetting agents. To ensure that the mixes conform to the Australian Standards, a number of different tests are completed on raw materials and throughout the manufacturing process. To use the word “premium” on the packaging, the potting mix must comply to this standard. Beware of companies labeling their product with synonyms of “premium” (such as “professional” or “superior”) as these usually aren’t compliant with the Australian standard and can be misleading to the consumer. Premium potting mixes tend to be more expensive due to the accreditation process involved.

What does “organic” potting mix or soil mean?

When it comes to soil, there can be two uses of the word “organic”. Organic can simply refer to the carbon based, organic matter in the soil. This may have come from manures, leaf litter, woody debris etc. Most soils have a component of organic matter. Soils high in organic matter are great for growing veggies.

You’ll often find garden supply yards labeling their bulk soils as an “organic soil mix”. This refers to the fact that the soil is high in organic matter, not that it is organically certified.

Setting up the potting mix experiment

We purchased 20 punnets of seedlings that all appeared to be of equal size and equal condition.

We purchased 20 punnets of capsicum seedlings whilst at Bunnings purchasing our various potting mixes for the experiment. These were all relatively the same size, in the same condition and appeared to have been sown at the same time. Using each of the different potting mixes and soils, we potted up five of each of the seedlings. We tried to make sure that each soil had a seedling from five different punnets to reduce the chance of experimental error.

The potted-up seedlings were then placed in our greenhouse. The pots were placed out in a pattern to ensure that the five pots of each of the soils were spread across the shelf. Each pot appeared to have equal access to light and water. The automated irrigation system watered every morning with a fine mist for 5 minutes. After six weeks, we assessed the plants and took photos of the results.

All of the capsicum seedlings potted up

The potted seedlings were placed so that they all received relatively equal amounts of light and water.

Our Potting Mix Experiment was placed under an automated irrigation

Results of the Potting Mix Experiment

We assessed each of the plants and recorded the colour of the leaves as well as the number of plants in each group that had set fruit. We also recorded the total number of flowers and fruit set on the 5 replicate plants combined. See the results tabulated below.

We also took photos of the plants. Below is an image of the best plant out of the five replicates for each soil type. As you can see there is a huge variation in the performance of each of the potting mixes.

The results from our potting mix experiment

So what does it all mean?

Never underestimate the importance of good quality soil in growing your fruit and veggies. Interestingly, price isn’t always a good indicator of quality. We found that some of the best results came from cheaper potting mixes such as Brunnings Tomato and Vegetable Growing Mix. As a general rule, the certified organic potting mixes performed fairly poorly. Which is understandable given they are not conditioned with inorganic fertilizers.

Keep in mind, that the premium potting mixes are only confirmed to support plant growth for the first three months. If you’re growing veggies, and especially fruit trees, in pots, over an extended period of time, it’s likely that you’ll need to top up the soil nutrients. You may be interested in the second part of our experiment, which looks at a range of off-the-shelf fertilizers that you may like to try.

On 03/04/17 we contacted the following manufacturers or suppliers of each of the products investigated:

We invite them to leave feedback on our experiment in the comments section below.

Update 30/04/17: We have finalised discussions with Scott’s Australia regarding the performance of the Scott’s and Debco products in our experiment. See below for details.

Disclaimer: All of the products tested and materials used in this experiment were purchased by Leaf, Root & Fruit at full retail price. No incentives or sponsorship are received from any of the companies mentioned in this blog post.

Response from Scott’s Australia regarding the performance of the Scott’s and Debco products in our potting mix experiment.

After releasing the results of our potting mix experiment, Scott’s responded with a series of phone calls and emails. We provided Scott’s with information relating to some of the batch numbers of potting mix used and further clarified how the experiment was run. They provided this written response. We have a few comments regarding their response:

“Scott’s cannot ensure that the product used were appropriate for trialling based on the ages found. The data described is not a true reflection of Scott’s and Debco quality and provides a biased view we believe based on bag age alone. Therefore the integrity of this trial has been placed in jeopardy when the data is stacking 1 year old mixes against other unknown aged products.“

The trial run the year previous (Dec 2015-Feb 2016) was with the Scott’s Premium Organic, which was purchased the day the experiment was set up. It had the same results as this year. So I’m not sure that the shelf life did have that much to do with the poor performance of that product. This is unless it had been sitting in Bunnings for considerable time before we purchased it. However, Scott’s response indicates that this is unlikely to be the case, due to high turnover of their product. It would be ideal to test all potting mixes fresh off the production line, and compare apples with apples, rather than apples with oranges. However, this experiment reflects the actual use of this product by the public. If a true, premium graded product, performs as the consumer expects it to, then this shouldn’t affect the results.

“The Australian Standard recommends a best before use date. This is a process Scott’s has considered but also knows from 6 years of sales data that no growing media is available for sale in stores longer than 4 months from delivery date.“

Other than the Scott’s Premium Organic, ALL potting mixes used in the experiment were purchased in the week prior to the experiment being set up back in December 2016. We have receipts available to substantiate this. The Scott’s Pure Organic Potting mix manufactured on 19th February 2016 was 10 months old when we purchased it in December from the Hawthorn Bunnings Store. If potting mixes have such a short shelf life, then we really can’t comprehend why they are not applied to the bags. Otherwise, manufacturers are setting unknown consumers up for failure. In many cases, consumers will not be using the potting mix the day they purchase it. It may sit in the garden shed for months or even years prior to use. Leaf, Root & Fruit are trying to support backyard growers to be more successful when trying to grow their own produce. A shelf life applied to the potting mix could further assist our work.

“Aspects of our Pure Organic Premium Potting and Planting and Debco Organic were labelled as high priced and ineffective in growth. When comparing organic lines against non-certified you are making large comparisons that cannot be measured equally.“

This experiment looked solely at the performance of capsicum seedling growth in a range of potting mixes. There are plenty of other ways to assess performance. But we feel that this (admittedly simple experiment) is a great way to do this on a tight budget. Readers of our blog post are welcome to make their own decisions about which potting mix to use based on their preference for organic vs non-certified vs budget vs performance.

Leaf, Root & Fruit would like to thank Scott’s Australia for their response. It has certainly been an eye opening experience and helped us to understand the industry better. It has also raised a few concerns for us regarding the consistency of potting mix quality and performance that each product may afford the consumer. We’ll look to repeat this experiment again in the future and would appreciate feedback from the public on how it may be improved to obtain even more meaningful results for our readers and gardening community.

79 thoughts on “Which Potting Mix is Best?”