There are several common pests and diseases that affect citrus trees in Melbourne. Generally pests only attack weaker trees. By planting your tree in a suitable location and providing the right fertilizing and watering regimes, your tree will stay healthy and strong.

The black citrus aphid is a common citrus pest

Aphids can infest new growth, mainly in spring. They are sap feeders and secrete sticky honeydew. The harmless fungus black sooty mould, often grows on this honeydew. Winged aphids are carried by wind to infest other trees and can carry the tristeza virus. Ladybirds, hoverflies and lacewings all feed on aphids. Avoid spraying small populations of aphids early in the season. Their natural predators will multiply and eventually control them. Mature trees can sustain heavy infestations without damage. Aphids can be hosed off with a jet of water, wiped off with your fingers or sprayed with white oil.

Adult scale insects are mostly immobile on the plant.

They feed by withdrawing sap through their sucking mouth parts. Juveniles emerge at various times of the year and spread to other plants by wind, birds, insects and on our clothing.

Some of the scales (eg Soft scales) produce honeydew on which black sooty mould may grow. These scale are often protected from predators by ants.

Small infestations of scale are not normally a problem for citrus trees. Larger numbers can be scraped off with your finger, or sprayed with a white oil solution. Controlling ants is another way to keep scale in check. 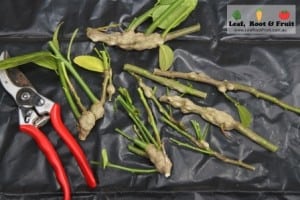 Citrus Galls caused by the Citrus Gall Wasp should be pruned out of the tree prior to August and burnt or disposed of.

The presence of large swellings or bulges on the branches of citrus trees is quite common in Melbourne.

These swellings indicate that Citrus Gall Wasp has infected the tree.

This tiny native Australian wasp lives for 3 to 4 days laying its eggs in the branches of the citrus tree. It is the tree’s ‘reaction’ to this egg-laying which produces the next year’s Citus Gall Wasp.

The traditional way to control of Citrus Gall Wasp is cutting off the swollen branches. The wasp emerges from the gall in aorund November, so you need to prune out as much of the gall prior to October to destroy the Citrus Gall Wasp life-cycle. Do not put the pruning into the compost or green-waste bin. Instead, put it in a plastic bag and put it in the garbage bin. Spraying to control the wasps are ineffective.

We’ve noticed the recent “Prune in June” campaigns have had a negative impact on many citrus around Melbourne. Take a look at our gall wasp blog post for some alternative control methods to pruning out the galls. 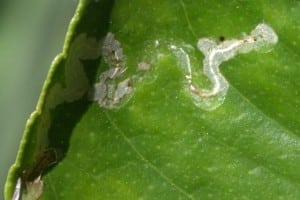 Avoid fertilising your citrus trees after February. Doing so will promote a flush of new growth. This leaves the tree susceptible to Citrus Leafminer infestation in Autumn.

Citrus leafminer is the larva of a tiny silvery white moth about 2mm long, when at rest. Adult moths are active at night so are rarely seen. The tiny larvae tunnel in immature leaves when they feed and leave wavy silvery trails. Leaves become crinkled, distorted and curl up at the edges when the larvae form their pupae.

Control of citrus leafminer is difficult. Because the leafminer is inside the leaf, sprays are generally ineffective. Affected growth, can be continuously removed to interrupt the life-cycle. Avoid fertilizer high in nitrogen, after February, to stop promoting new growth at this time.

Phytophthora is the most common fungus to cause root rots in citrus. It grows on susceptible rootstocks in conditions where trees and soil remain wet for long periods. The bark near ground level becomes soft, dark-stained, water-soaked and sometimes gummy. The wood beneath the bark turns dark brown and dead bark is sometimes shed in vertical strips. Severe infection of the trunk and main roots, will kill the tree.

There is no treatment for this disease. To prevent phytophthora, only grow trees on trifoliata (or flying dragon) rootstocks in Melbourne. Select well-drained sites avoid mulching too closely to the trunk and avoid over-watering the tree.

There are several other “problems” that you might notice when growing citrus in Melbourne.

Citrus normally shed large numbers of fruitlets shortly after blossoming in the spring and at early fruit set (pea size). However, it is also common for a sudden drop of small fruit (20 mm diameter) to take place in the summer, when warmer weather places stress on the tree. The problem is particularly severe in young navel orange trees and may be related to lack of water at, or soon after, fruit set. Root diseases and lack of nitrogen or trace elements may also be responsible.

Rind splitting of fruit, particularly in navels, also occurs before or near maturity as a result of climatic factors. These factors specifically are drops in average temperatures and increases in relative humidity, at a time when the rate of fruit growth is decreasing. There is no control for the disorder.

Preharvest drop in the autumn, before fruit is fully mature, is a common problem with navels and grapefruit. Some of this drop is natural. Some mandarin and lemon varieties, will also shed fruit when damaged by the spined citrus bug. Brown spot infection in mandarins will result in fruit drop.

Alternate cropping (biennial bearing) is a common problem with many citrus varieties, such as Valencia orange, Wheeny grapefruit, and mandarins. After a heavy crop the tree often responds by carrying a light (or nil) crop. Once this cropping pattern is established it is difficult to return to regular annual cropping. Pruning or thinning of the heavy crop, and early harvesting will assist in reducing the problem.

Sometimes, orange trees will produce blossoms in the autumn after a stress period, and set a second crop. This fruit is often of poor quality (thick skins and low juice content). With lemon trees, however, these intermediate crops are desirable as the fruit quality remains high.

Want to know more about Growing Citrus in Melbourne?

This is Part 5 of a 5 part guide to growing citrus in Melbourne. The links below will take you to the other four parts of our Melbourne citrus growing guide.

Citrus Growing Guide Part 2: Where and How to Plant Your Citrus Tree

Our citrus growing guides are based on my own experience, as well as the following two books. They are both invaluable resources for the home gardener based in Melbourne. I strongly recommend you have a read of both if you want to know more about growing citrus in Melbourne:

Louis Glowinski: The Complete Book of Fruit Growing in Australia, 1997.